In the statement, the 15-member body also called on the parties to reject acts of violence to achieve political goals, and refrain from provocation and all unilateral actions to undermine the political transition.

Members welcomed the fact that Abdo Rabbo Mansour Hadi, the legitimate President of Yemen, is no longer under house arrest, and demanded that the Houthis immediately, unconditionally and safely release Prime Minister Bahah, members of the Cabinet and all individuals still under house arrest or arbitrarily detained.

The statement pointed to several documents that aim at ensuring a Yemeni-led democratic transition in accordance with a number of Council resolutions passed since last year and members strongly called on all parties, in particular the Houthis, to abide by them, notably the Gulf Cooperation Council Initiative and its Implementation Mechanism, the outcomes of the comprehensive National Dialogue conference, and the Peace and National Partnership Agreement, and its security annex.

The intention of the President of Yemen, Abdo Rabbo Mansour Hadi, to engage in good faith in the UN-brokered negotiations was welcome, Council members said, and they urged all parties to accelerate the negotiations to continue the political transition. The statement added that the aim should be reaching a consensus solution in accordance with the GCC Initiative and Implementation Mechanism, as well as the outcomes of the comprehensive National Dialogue conference, and the Peace and National Partnership Agreement and its security annex, and to implement that solution.

Council members reaffirmed their support for and commitment to the work of the Special Adviser to the Secretary-General on Yemen, Jamal Benomar, in assisting the parties in reaching consensual agreements in order to resolve the political crisis. They stressed the importance of all parties allowing all Yemenis to assemble peacefully without fear of attack, injury, arrest, or retaliation, and reaffirmed their strong commitment to the unity, sovereignty, independence and territorial integrity of Yemen. 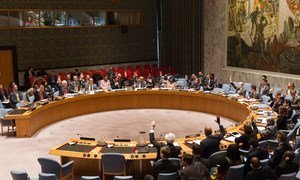 Under the terms of a resolution unanimously adopted by the United Nations Security Council today, members decided to extend the mandate of the group of four experts on Yemen, which was established to oversee sanctions measures employed against individuals and entities designated as threatening peace, security or stability in the country.