'We must not fail in Gaza' say UN agencies, joining global call to action

United Nations agencies and offices are expressing alarm over the limited progress in rebuilding the lives of those affected by last summer's fighting between Israeli forces and Palestinian armed groups in the Gaza Strip.

A joint statement from some 30 international aid agencies said that six months after a ceasefire ended over seven weeks of fighting the Israeli-imposed blockade continues, the political process, along with the economy, are paralyzed, and living conditions have worsened.

“Reconstruction and repairs to the tens of thousands of homes, hospitals, and schools damaged or destroyed in the fighting has been woefully slow. Sporadic rocket fire from Palestinian armed groups has resumed,” the agencies said.

“Overall, the lack of progress has deepened levels of desperation and frustration among the population, more than two thirds of whom are Palestine refugees,” they emphasized.

Living conditions in Gaza were already dire before the latest round of fighting. Most residents were unable to meet their food requirements and over seven years of blockade had severely compromised access to basic services, including to health, water and sanitation.

“But since July, the situation has deteriorated dramatically. Approximately 100,000 Palestinians remain displaced this winter, living in dire conditions in schools and makeshift shelters not designed for long-term stay,” the statement said.

Scheduled power cuts persist for up to 18 hours a day. And the continued non-payment of the salaries of public sector employees and the lack of progress in the national unity government further increases tensions. With severe restrictions on movement, most of the 1.8 million residents are trapped in the coastal enclave, “with no hope for the future,” agencies said.

Bearing the brunt of this suffering are the most vulnerable, including the elderly, persons with disabilities, women and nearly one million children, who have experienced unimaginable suffering in three major conflicts in six short years. Children lack access to quality education, with over 400,000 of them in need of immediate psychosocial support.

Agencies say that the international community is not providing Gaza with adequate assistance. “Little of the $5.4 billion pledged in Cairo has reached Gaza. Cash assistance to families who lost everything has been suspended and other crucial aid is unavailable due to lack of funds,” they noted.

A return to hostilities is inevitable if progress is not made and the root causes of conflict are not addressed, they added, calling on Israel, “as the occupying power,” to comply with its obligations under international law and fully lift the blockade, within the framework of UN Security Council Resolution 1860 (2009).

The fragile ceasefire must be reinforced, and the parties must resume negotiations to achieve a comprehensive settlement of the Israeli-Palestinian issue. “All parties must respect international law and those responsible for violations must be brought to justice. Accountability and adherence to international humanitarian law and international human rights law are essential pre-requisites for any lasting peace,” the non-governmental agencies said.

Also imperative, Egypt needs to open the Rafah Crossing, most urgently for humanitarian cases, and donor pledges must be translated into disbursements, they added. 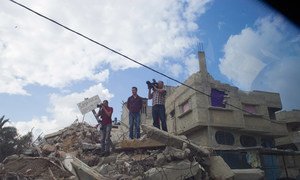 The United Nations Resident and Humanitarian Coordinator for the occupied Palestinian territory today launched an appeal to boost funding for more than a million Palestinians who continue to face grim conditions on the ground and an uncertain future.