The United Nations Office of the Special Adviser on Africa (OSAA) held a meeting at Headquarters in New York today on the role of the extractive industry in Africa.

The High-Level Expert Group Meeting was organized by Special Advisor Maged Abdelaziz in conjunction with the African Union Commission (AUC), as well as bodies such as the UN Economic Commission for Africa (ECA), the African Development Bank (AfDB), the UN Industrial Development Organization (UNIDO) and the Department of Public Information (DPI).

The event, which looked to the post-2015 development agenda and the African Union ‘Agenda 2063,’ explored how to enhance management of Africa’s extractive industries in order to fully harness their potential as important drivers for sustainable development, structural economic transformation and inclusive growth.

According to the OSAA, Africa has an abundant natural resource endowment, boasting 12 percent of the world’s oil reserves, 40 per cent of its gold and around 60 percent of its uncultivated arable land. With increasing global demand for primary resources, especially in rapidly growing emerging economies, the continent aims to continue exploiting its comparative advantage, with efforts so far seeing trade grow from $251 billion in 1996 to $1.151 trillion in 2011.

Despite strong export performance in the sector, African countries have not yet fully harnessed the full potential of their rich natural resource endowments or employed their natural resource advantages as an engine for inclusive economic growth.

Under the post-2015 agenda and the African Union Agenda 2063, revenue from natural resources, including the extractive industries, will be a key source for development financing. Both aim at achieving long-term economic growth and full and productive employment, with the AU Agenda 2063, in particular, underscoring the crucial role of industrialization, including through value addition of natural resources.

Sir Paul Collier, the co-director of the Centre for the Study of African Economies at Oxford University and author of the book, The Bottom Billion, was the keynote speaker at the event, while panellists included Ibrahim Assane Mayaki, the Chief Executive Officer of the New Partnership for Africa’s Development (NEPAD), the African Union’s development agency, and Fatima Haram Acyl, the African Union Commissioner for Trade and Industry. 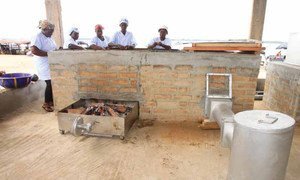 A newly developed fish drying technology is improving food quality and saving lives in West Africa, the United Nations Food and Agriculture Organization (FAO) announced today as it launched its effort to boost food safety and working conditions across the region.