OCHA
A patient at a health clinic in a Protection of Civilian (POC) site in Bor, South Sudan.
24 February 2015

The World Health Organization (WHO) today appealed to donors to provide $1 billion for life-saving health needs ranging from childhood vaccinations to surgical care for the severely wounded for some 25 million people caught up in conflict across the Central African Republic, Iraq, South Sudan and Syria.

The United Nations health agency made that call today, on behalf the entire Health Cluster of humanitarian organizations it coordinates, at a special session at its Geneva headquarters attended by more than 50 donor countries and other Member States.

“But the huge stresses they pose also underscore the great needs – and funding gaps – that WHO, and our health partners, from NGOs to sister United Nations agencies, face,” Dr Aylward added.

All four countries for which the appeal was made are classified as so-called “Grade 3” category crises, which require the highest-level of response that the UN can deliver.

In each of the countries – the Central African Republic (CAR), Iraq, South Sudan and Syria – WHO reported that the needs range from basic health care such as childhood vaccinations to surgical care for severely wounded patients caught up in the conflicts.

“In Iraq and CAR, for example, around one-quarter of hospitals, clinics and other health facilities have been damaged in their respective conflicts, or are not functioning,” according to WHO. “The sheer scale of humanitarian needs in 2014, coupled with insufficient funding levels, has stretched the capacity of the entire humanitarian system, including WHO, to the limit.”

Overall, the Health Cluster group of humanitarian organizations needs $1 billion – $322.7 million by WHO and $687 million for its partner agencies – to deliver health services to 25 million people in the major crises, the majority women and children, as follows:

WHO and its partners have provided care to millions of people across each country ranging from routine immunization programmes against measles, polio and other vaccine-preventable diseases, delivering medical and health services ranging from surgical care, treating non-communicable diseases like cancers, diabetes, heart and lung diseases, and providing primary health care support to remote and besieged communities. 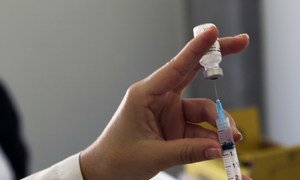 The United Nations World Health Organization (WHO) today called for all countries to switch by 2020 to new ‘smart’ syringes that cannot be used more than once as an “absolutely critical” stop to protect millions of people from deadly infections acquired through unsafe injections.