A newly developed fish drying technology is improving food quality and saving lives in West Africa, the United Nations Food and Agriculture Organization (FAO) announced today as it launched its effort to boost food safety and working conditions across the region.

With smoked fish remaining a staple food product and vital source of income for many African coastal communities, the innovative FAO-Thiaroye Processing Technique, otherwise known as FTT and pioneered by the UN agency, will now seek to transform the kiln-drying method traditionally used for smoking fish into a healthier and more environmentally friendly process.

“Traditional smoking techniques often involve a massive burning of wood which leads to a variety of problems,” Yvette Diei-Ouadi, a fishery industry expert at FAO, explained in a press release.

“For one, an exorbitant amount of CO2 is produced, so the kilns produce more greenhouse gas pollution than they should. Also, traditional smoking releases contaminants known as polycyclic aromatic hydrocarbons (PAHs), which are carcinogenic and hazardous to the human respiratory system.”

Smoked fish accounts for a large part of the West African diet. In Côte d'Ivoire, where the FTT is being rolled out, an estimated 20 to 30 per cent of local marine and freshwater catch is consumed in smoked form. Throughout the region, smoked fish is generally preferred by locals for its taste, nutritional benefits, competitive prices and long shelf-life, which ranges from three to 6 months.

As a result, the new FTT technology permits users to easily upgrade their traditional ovens while slashing the amount of carcinogenic contaminants and residue produced during smoking. At the same time, the technology also reduces the amount of fuel needed and provides a load capacity five times greater than traditional barrel ovens.

“This is a system developed to address many aspects of fish smoking operations,” said Ndiaye Oumoulkhaïry, a member of the FTT design team. “In the first place stands the safety aspect - to secure consumers' health and meet international food standards. Then there's reducing post-harvest losses, and also curbing the drudgery of fish processors who are now least exposed to the heat and smoke.”

In Ivorian fishing village of Abobodoumé, the FTT technique is already proving to be a success, according to the FAO, which noted that female fish processors “took immediate liking to the new FTT additions,” including a collection plate which traps dripping fish oils they can re-use for manufacturing soap or as cooking oil.

The new technology is also proving popular in other African fishing nations and its use is starting to spread in Senegal, Côte d'Ivoire, Tanzania and Ghana. 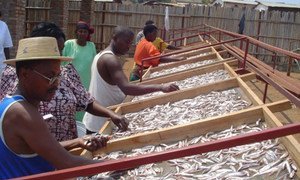 It was a simple adjustment – drying fish on raised racks instead of the sand – but the United Nations food agency project in Burundi has cut fish waste by half, provided jobs for hundreds of families and sparked a surge in the prices for the small sardine-like ndagala.