From the Democratic Republic of the Congo (DRC) to the Central African Republic (CAR), United Nations’ peacekeeping missions must make greater use of technological advances in order to better confront the dynamic challenges of the 21st century, according to a group of UN experts.

The findings of the five-member Expert Panel on Technology and Innovation, led by peace and security expert Jane Holl Lute and published in a report released today, include a number of practical recommendations that call on the UN Departments of Peacekeeping Operations and Field Support to keep pace with innovation and take full advantage of readily available and existing technologies that are considered essential to success in the field.

“Every peacekeeping mission in the field ought to have at least the same level of technology that Member State militaries and polices now consider operationally imperative – whether it’s command and control, communications, mobility, shelter, the provisioning of essential supplies,” Ms. Lute explained in an interview with UN Radio.

“All of these things which are now standard in the operation of many organizations around the world need to be brought to peacekeeping.”

Scattered across vast countries and forbidding territories, UN peacekeeping missions frequently encounter challenges in executing their mandates. Over the past year, however, the UN has steadily ramped up its use of technology in the field in order to assist its missions with monitoring efforts.

In the DRC, where unwieldy terrain, dense forests and vast distances can debilitate the UN’s response time to an emergency, the introduction of unmanned aerial vehicles (UAVs) has had an immediate impact. In one instance last year, a UAV detected a ferry accident in Lake Kivu, in the country’s east, instantly prompting the UN peacekeeping mission in the country to dispatch its speedboats and helicopters to the scene. The ‘blue helmets’ quick response led to the rescue of 15 people.

UAVs are “a good example of one technology of which a lot of organizations around the world are making increasing use,” Ms. Lute continued. “We think this is a capability missions ought to be able to take greater advantage of.”

“The ability to visualize your operating area of responsibility from the air is an essential capability for every mission, really with only a few exceptions,” she added.

Along with the critical upgrade of field technology, UN blue helmets are also aiming to ‘go green’ through the responsible use of limited resources, in a bid to leave mission areas in better shape than when they arrived. Among other steps, GIS data is being used to help find water sources for missions so as not to compete with the local water supply.

Missions are also including waste water treatment plants designed to drastically reduce the need for water and generation of disposable waste, as well as exploring alternative sources of energy such as solar panels.

Nonetheless, while technology moves quickly, the Organization’s lumbering procurement systems may sometimes cause unexpected and unwanted delays for the introduction of critical technologies into the field.

“The UN needs to construct the kinds of support systems necessary to facilitate greater use of technology so we need procurement systems that can identify and acquire capabilities in not more than 18 months because longer than that technology has already changed and moved on,” Ms. Lute noted.

In a separate note to UN correspondents released last Friday, the lead expert admitted that as UN peacekeeping missions continue to face down “rapidly evolving and complex environments,” the Organization’s “blue helmets” would be increasingly pressured to transition to a culture that values innovation.

“UN peacekeeping must be ready to respond to a vast array of challenges,” said Ms. Lute. “No advantage should be withheld for those working for peace.” 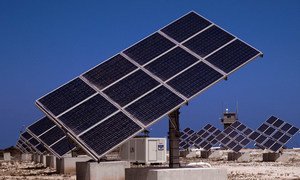 A group of United Nations experts have urged the Organization’s peacekeeping presence to incorporate technological advances into its operations in order to better confront the dynamic challenges of the 21st century, the UN’s spokesperson’s office said today.