In a Security Council meeting today in which Member States reaffirmed their commitment to the United Nations Charter, the Secretary-General said the UN was an Organization with major achievements to its credit, multiple crises on its agenda, and tremendous opportunities ahead.

“The United Nations was founded to prevent another world war, and it has succeeded in that,” said Ban Ki-moon. “Despite the recurrence of genocide and repeated outbreaks of armed conflict, the past seven decades would surely have been even bloodier without the United Nations.”

As well as making a major contribution to peace and security, the UN was directly involved in helping people to live longer, healthier lives, in empowering women, in advancing international law and democratic governance and improving collective well-being.

Mr. Ban described how the world had “starkly” changed since the Charter was drafted and how those changes were reflected within the UN, with four times as many Member States and new items, such as climate change, on the international agenda.

Despite those changes, the aspirations contained within the Charter remained “valid, valuable and vital”, especially the commitment to prevention of armed conflict through the peaceful settlement of disputes and the protection of human rights.

“The Charter is a living document, not a detailed roadmap,” he explained. “It is our compass, enshrining principles that have stood the test of time.”

Despite that flexibility, he noted that UN Member States needed to fortify a sense of unity on the meaning of the term ‘collective security’, which he stressed was the core purpose of the Organization.

“We no longer have a full meeting of minds,” he observed. “We need to reflect on what has changed.”

States were also falling short in their personal responsibility to prevent conflict, something about which the Charter was very clear, and he stressed that the collective work of the UN was based on consent and respect for the sovereign equality of all members.

UN human rights action often caused concern among Member States because of fears such action could harm national sovereignty, he said, stressing that in fact, early action to prevent conflict and protect human rights helps to strengthen sovereignty, rather than challenge or restrict it, and that serious violations of human rights that weaken sovereignty.

“In today’s world, the less sovereignty is viewed as a wall or a shield, the better our prospects will be for protecting people and solving our shared problems,” he said, stressing that the goal of UN human rights action is to support government officials, parliamentarians, civil servants, judges and others who lead national institutions that are essential to sovereignty.

Human rights abuses also killed and displaced people, divided communities, undermined economies and destroyed cultural heritage and he called for “a conceptual shift” in international understanding of UN human rights action in order to transform the Security Council’s role in peace and security.

“We must ask whether, for example, earlier efforts to address human rights violations and political grievances in Syria could have kept the situation from escalating so horrendously,” he said. “We must be willing to act before situations deteriorate. This is both a moral responsibility and critical for the maintenance of international peace and security. We cannot afford to be indifferent.”

Noting that the distinctions between national and international were beginning to disappear, Mr. Ban cited commerce, communication, public health and climate change as areas of transnational concern. Terrorism and extremism were also serious issues and he highlighted the need to respond decisively, and to combat extremism without multiplying the problem and with full respect for human rights.

On many other such issues of international concern, the UN’s 70th anniversary should serve as a chance to seriously reflect on States’ common enterprise and to take transformative action on issues including sustainable development and climate change.

“Let us reaffirm our commitment to each other in the great cause of living together with dignity and peace for all,” he concluded. 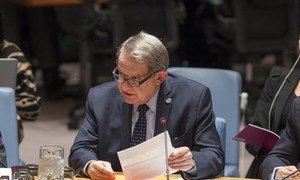 As the United Nations Special Committee on Decolonization began its 2015 session today, the acting assistant political chief, Jens Toyberg-Frandzen, underlined the importance of political will to the continued success of the body’s efforts.