OSCE/Evgeniy Maloletka
A monitor from the Organization for Security and Co-operation in Europe (OSCE) Special Monitoring Mission to Ukraine inspects damage to a building, 9 July 2014.
20 February 2015

United Nations Secretary-General Ban Ki-moon today spoke by telephone with Ukraine’s Foreign Minister, Pavlo Klimkin, voicing his concern at the “still dangerous” situation on the ground and expressing hope that the ceasefire agreed to on 12 February in Minsk firmly takes hold across the region.

“On the possibility of a peacekeeping mission in eastern Ukraine, the Secretary-General informed the Foreign Minister that the United Nations would stand guided by any decision the Security Council would make on this issue,” said a note released to the press by Mr. Ban’s spokesperson this afternoon.

In his phone call with Minister Klimkin, Mr. Ban also commended the leadership of Ukrainian President Petro Poroshenko in efforts to find a peaceful resolution to the ongoing conflict. In addition, Mr. Ban and Mr. Klimkin agreed to continue their discussion on these matters.

Also today, at a press briefing in Geneva, the UN human rights office expressed deep worry over the fate of civilians and Ukrainian servicemen in the Debaltseve area, where heavy fighting has continued as a result of repeated breaches of the truce.

“It is unclear how many civilians were trapped while fighting raged in the town, how many have been wounded or killed, and whether they now have access to medical and other basic services,” UN Office of the High Commissioner for Human Rights (OHCHR) spokesperson Rupert Colville told reporters.

“We deeply regret also that OSCE [Organization for Security and Co-operation in Europe] monitors were not, and still have not been, allowed access to this area. We are also concerned about the resumed shelling of populated areas, in the cities of Donetsk and Mariupol in particular,” he added.

Mr. Colville said that it is crucial that the ceasefire is respected and the fighting stops, especially in built-up areas, and the Minsk Agreements are fully implemented.

The death toll since the beginning of the conflict in mid-April 2014 has now risen to at least 5,692 as of Wednesday, 18 February. At least 14,122 people have also been wounded in the east of Ukraine. However, this is “conservative estimate” and the actual numbers may be considerably higher, Mr. Colville said.

“A further increase in the number of recorded casualties is expected in the coming days because reporting on casualties during the pre-ceasefire period, and especially in recent days in Debaltseve, has been considerably delayed.”

He added that the condition of captured Ukrainian pilot Nadiia Savchenko, who has been detained in Moscow since July last year, is also worrying. Today is the 70th day of her hunger strike. And according to her lawyer, she decided to refuse glucose injections which were being given to her. Mr. Colville called on the Russian authorities to release her immediately. 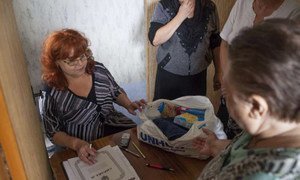 With fragile ceasefire in place, UN agencies scale up humanitarian operations in Ukraine

Several days after parties to the conflict in Ukraine signed a ceasefire, United Nations agencies announced a scale up of their emergency operations to the country, delivering some 62 metric tons of humanitarian aid to the crisis-torn Donetsk region today.