The United Nations Secretary-General said today that the World Day for Social Justice comes at a pivotal moment for people and the planet, adding that this year's commemoration focuses on the scourge of human trafficking and the plight of approximately 21 million women, men and children in various forms of modern slavery.

The United Nations Secretary-General said today that the World Day for Social Justice comes at a pivotal moment for people and the planet, adding that this year's commemoration focuses on the scourge of human trafficking and the plight of approximately 21 million women, men and children in various forms of modern slavery.

“New instruments such as the ILO (International Labour Organization) Protocol and Recommendation on forced labour and human trafficking are helping to strengthen global efforts to punish perpetrators and end impunity,” said Ban Ki-moon in a message marking the Day. “We must continue to do more. We simply cannot achieve development for all if we leave behind those who are socially and economically exploited.”

In what he described as a crucial year for global development, he said more needed to be done to eradicate all forms of human exploitation.

With Member States working to craft a post-2015 agenda and a new set of sustainable development goals, Mr. Ban called on the international community to build a world of social justice where all people can live and work in freedom, dignity and equality.

“Around the world, there is a rising call to secure a life of dignity for all with equal rights and respect for the diverse voices of the world's peoples,” he said. “At the core of this movement lies the need for social justice.”

In a separate message on the Day, ILO Director-General, Guy Ryder, stressed: “There is no inevitability, no excuse: Forced labour can be stopped”

“The situation is aggravated by the widespread absence of basic social protection. Millions of people are subjected to unacceptable conditions of work and the denial of fundamental rights,” Mr. Ryder emphasized.

According to the ILO, about 21 million women, men and children are forced to work under inhuman conditions on farms, in sweatshops, on board fishing vessels, in the sex industry or in private homes. Their sweat generates $150 billion in illegal profits annually.

And women and children are particularly at risk of being abducted and sold into slavery in times of violent conflict. Forced labour can also keep entire families in abject poverty for generations.

The ILO calls for ending forced labour calls with an integrated approach. Governments, employers, trade unions and civil society, each have a role to play in protecting, defending and empowering those who are vulnerable, as well as creating opportunities for decent work for all. 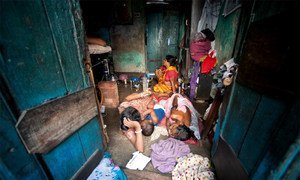