As the United Nations Special Committee on Decolonization began its 2015 session today, the acting assistant political chief, Jens Toyberg-Frandzen, underlined the importance of political will to the continued success of the body’s efforts.

“I call on the international community to address the issue of self-government and find innovative and practical ways to implement the decolonization process,” he said, pointing to an increase in productive cooperation among the Committee, the administering Powers and the Non-Self-Governing Territories. “Let us seize this momentum and move the decolonization agenda forward.”

Mr. Toyberg-Frandzen described work carried out in 2014 on decolonisation, including the mission that visited New Caledonia, which he said was the first such mission since 2007, and the successful repetition of dialogue between the Bureau of the Committee and each of the four administering Powers as well as various other stakeholders.

Speaking on behalf of the Secretary-General at the meeting in New York, Mr. Toyberg-Frandzen, who serves as Interim Assistant Secretary-General for Political Affairs, said 17 Non-Self-Governing Territories across the globe remain under the purview of the Committee, adding that 2015 was the midpoint of the Third International Decade for the Eradication of Colonialism and also marked 55 years since the Declaration on the Granting of Independence to Colonial Countries and Peoples.

The Committee (informally known as the “C 24”) annually reviews the list of Territories to which the Declaration is applicable and makes recommendations as to its implementation. It also hears statements from Non-Self-Governing Territories’ representatives, dispatches visiting missions, and organizes seminars on the political, social and economic situation in the Territories.

The 17 remaining Non-Self-Governing Territories still under the purview of the Committee are home to nearly two million people and include New Caledonia, Gibraltar, Western Sahara and Guam.

“As we celebrate this year the 70th anniversary of the United Nations, we also mark 70 years in advancing the Organization’s historic decolonization mandate,” he said. “Yet this process is not complete.”

♦ Receive daily updates directly in your inbox - Subscribe here to a topic.
♦ Download the UN News app for your iOS or Android devices.
Decolonization 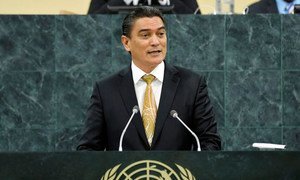 Urging inclusive development that left no one on the margins of society, the Prime Minister of Vanuatu today stressed that the United Nations General Assembly is the forum where leaders can “speak their hearts freely” on a range of urgent issues, from collective security to human rights and decolonization.