Syrian authorities should release all those held by Government forces and its militias, without due process, in some cases for years on end, the United Nations rights chief urged today, noting which said that activists, lawyers and human rights defenders had been particularly targeted.

In one emblematic case, three prominent members of the Syrian Centre for Media and Freedom of Expression, Mazen Darwish, Hani Al-Zaitani and Hussein Ghrer, have now been held for three years under the 2012 anti-terrorism law.

The three men were unaccounted for during the first nine months of their detention, which began on 16 February 2012, and last month, their trial was postponed for the sixth time, with no new date set. While a general presidential amnesty, issued in June 2014, pardoned many held under the law, Mazen Darwish and his colleagues, as well as an unknown number of others, were excluded.

“I urge the Syrian Government to immediately release all those who have been jailed for peaceful expression of their views and to ensure that all those detained are accorded their full due process rights,” High Commissioner Zeid said.

He also drew attention to atrocious conditions in which detainees are held, noting the Government’s record of torture and ill-treatment of detainees, which has been well-documented prior to, and during, the conflict.

“Recent interviews with released detainees reveal a grim situation at the Political Security Branch, where the detainees were reportedly kept in cells measuring no more than six-by-seven meters, containing up to 55 detainees each, without adequate food or medical care,” noted Mr. Zeid. “They described the use of torture rooms and equipment as well as the extreme cruelty of interrogators.”

Various UN human rights reports have revealed a broad pattern of torture and ill-treatment in detention facilities at intelligence agencies, and in prisons and military hospitals. Torture is most common during the first days or weeks of detention and is used to obtain information, intimidate detainees or to force them to sign false confessions. There are also accounts of deaths in detention due to torture and atrocious living conditions.

Mr. Zeid said that security forces are known to detain people at checkpoints, during raids, military incursions and even when individuals appear at Government facilities for administrative reasons, like registering a birth or accessing social services.

Militias affiliated with Government forces have also reportedly set up their own checkpoints in different parts of Syria and have been involved in the abduction of activists and human rights defenders. Some of these militias are known to run facilities where those abducted are held and reportedly face torture and ill-treatment.

“Estimates of the number of people in Syria who have been held at some point or other in Government and intelligence detention facilities since the first protests began in Daraa in March 2011 range from tens of thousands to hundreds of thousands,” the High Commissioner said. 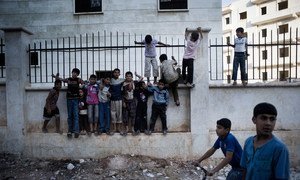 The Secretary-General’s Special Envoy for Syria, Staffan de Mistura, sees a “glimmer of hope” for his proposed ‘freeze’ of localized hostilities in the city of Aleppo amid continuing fighting throughout the Middle Eastern country between Government forces and entrenched rebels.