An agreement for $500,000 for urgent assistance to assist people whose food security and livelihoods are at risk following a sharp fall in crop production due to drought was signed by Cape Verde’s Prime Minister, José Maria Pereira Neves, and FAO's Director-General, José Graziano da Silva, during a meeting in Rome.

Cabo Verde experienced 65 percent less rain in 2014 compared to the previous year and some 30,000 people need urgent assistance, with many of the most vulnerable households having lost all or a large part of their cereal crops in eight of the country’s most affected islands. The emergency intervention aims to assist 8,237 rural households which are most vulnerable to the impact of drought.

Estimates from a FAO assessment mission carried out last month indicated the output from maize crop at some 1,000 tonnes. This represents the lowest level of production ever recorded in the country, and one which follows a steep downward trend over the last few years.

"This is an extremely important agreement that will not only allow us to face the current drought, but also help to create conditions to build a sustainable agriculture in Cabo Verde," Mr. Pereira Neves said.

Building on previous experience aimed at improving the use of the country’s scarce water resources, and with a view to strengthen resilience capacities, drip-irrigation kits will be distributed.

Considering that the production of livestock fodder was also found to be very seriously affected by the low rain levels, putting thousands of animals at risk, emergency distribution of animal feed will also be provided to 668 livestock breeding households, said FAO.

In line with one of its strategic objectives, FAO is committed to building the resilience of agricultural systems and agriculture-dependent livelihoods to threats and crises. Making agriculture production less dependent on highly variable and unpredictable rainfalls is particularly crucial in an effort to build resilience in Cabo Verde. 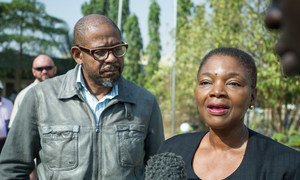 South Sudan is on the brink of a major food insecurity crisis as millions of people remain trapped by the country’s ongoing internecine fighting, the United Nations Food and Agriculture Organization (FAO) has warned.