UNAMA/Fardin Waezi
Increased ground engagements between parties to the armed conflict in Afghanistan are behind a 22 per cent rise in conflict-related deaths and injuries of Afghan civilians in 2014, the UNAMA said on the release of its 2014 Annual Report on Protection of Civilians in Armed Conflict.
18 February 2015

A total of 3,699 civilians were killed and 6,849 injured in 2014. The figures, released today in the Annual Report on Protection of Civilians in Armed Conflict and prepared in coordination with the Office of the UN High Commissioner for Human Rights, are the highest number of civilian casualties recorded in a single year since the UN started keeping track in 2007.

The report also found that for the first time since 2009, more Afghan civilians were killed and injured in ground engagements than improvised explosive devices (IEDs). Civilian deaths and injuries from ground operations surged 54 per cent in 2014. Parties to the conflict are increasingly using mortars, rockets and grenades, sometimes indiscriminately, in civilian areas.

“Rising civilian deaths and injuries in 2014 attests to a failure to fulfil commitments to protect Afghan civilians from harm,” the UN Secretary-General's Special Representative for Afghanistan and head of UNAMA, Nicholas Haysom, said today as he presented the report in Kabul.

“Parties to the conflict should understand the impact of their actions and take responsibility for them, uphold the values they claim to defend, and make protecting civilians their first priority. We need to see concrete steps and a real drop in civilian casualties in 2015,” Mr. Haysom stressed further.

In speaking with dozens of women from all regions in Afghanistan whose husbands –all civilians – were killed or seriously injured, UNAMA found that women who were left as sole income-providers for their households faced poverty forcing many women to give their daughters in marriage in exchange for debts or to take their children out of school to work. Widowed women were particularly vulnerable to forms of violence from family and community members.

The UN Mission had shared a draft of its 2014 Annual Report with the Government of Afghanistan, the Taliban and NATO's Resolute Support Mission. In its recommendations to all three groups, UNAMA called on Anti-Government Elements to cease carrying out indiscriminate attacks and deliberately targeting civilians. Armed groups must also enforce statements made by Taliban leadership that prohibit attacks on civilians.

Meanwhile, UNAMA called on the Government of Afghanistan to cease firing rockets and grenades into civilian areas and enforce efforts to protect its people. It must also disarm armed groups and ensure accountability for human rights abuses. To international forces, UNAMA urged them to ensure all foreign intelligence or security forces take all necessary measures to protect civilians during ground and aerial operations. 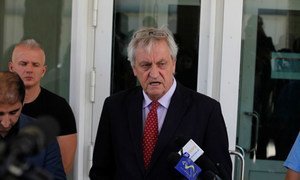 The United Nations Assistance Mission in Afghanistan (UNAMA) has today condemned the killing yesterday of a family, as well as the driver of the taxi they were travelling in when the vehicle hit a pressure-plate improvised explosive device planted on a road in the eastern province of Nangarhar.