UNDP Ukraine
UNDP experts are selecting sites for social care restoration as part of a UNDP and Government of Japan project in the Donetsk and Lugansk regions of Ukraine.
17 February 2015

The United Nations Security Council today adopted a resolution endorsing the 13-point accord on ending the Ukraine crisis agreed in Minsk – including a cease-fire – and called on all parties to the conflict to fully implement that cessation of hostilities, as the UN human rights office expressed concern over reported shelling and trapped civilians in the country’s east.

Adopting a unanimous resolution, the 15-member Council endorsed the ‘Package of measures for the Implementation of the Minsk Agreements,’ which was adopted and signed in Minsk on 12 February. That agreement is annexed to the resolution. It states that the immediate and comprehensive ceasefire in certain areas of the Donetsk and Luhansk regions went into effect on 15 February, 12am local time.

Today, Council Members also welcomed the Declaration by the Presidents of Russia, Ukraine, France, and the Chancellor of Germany in support of the Minsk Agreements (Annex II), and their continuing commitment to its implementation.

The Council called on all parties to fully implement the ‘Package of Measures,’ including a comprehensive ceasefire as provided for therein. It also decided to remain seized of the matter.

In a separate statement read out to reporters by Ambassador Jieyi Liu of China, which holds the Council’s presidency for the month, Council members expressed grave concern over the continued fighting in and around Debaltseve, Ukraine, which has resulted in numerous casualties.

The Security Council said it regretted that despite the announcement of a ceasefire on 15 February, violence has continued in recent days in some parties of eastern Ukraine.

Echoing that sentiment, the Office of the UN High Commissioner for Human Rights (OHCHR) also expressed concern by reports of continued shelling and trapped civilians in Debaltseve.

While reliable information on the fighting or casualties in the area has yet to be verified, spokesperson Rupert Colville said “We believe there may be a few thousand hiding in cellars, struggling to get food, water and other basic necessities. It is unclear how many civilians are still there.”

Although the first two days of the truce witnessed a dramatic decrease in the number of causalities reported, especially amongst civilians, artillery and small arms exchanges did not cease completely.

At the same, OHCHR continues to work on verifying these and other reports of civilian casualties during the ceasefire period.

The data available at this point reveals that since the beginning of the conflict – that began in mid-April 2014, until the 15 February truce – 5,665 people have been killed and 13,961 wounded in the east of Ukraine.

The UN Human Rights Mission in Ukraine and the World Health Organization (WHO) anticipate a further increase in figures in the coming days as casualty reporting during the ongoing hostilities, prior to the pre-ceasefire period was considerably delayed due.

The UN Human Rights Office will issue its next full report on the human rights situation in Ukraine on 2 March 2015.

The Ukraine crisis began to deepen in late February 2014 when it evolved from an initial internal political crisis into violent clashes in parts of the country. It later reached full- scale conflict in the east. Despite an earlier Minsk cease-fire, the situation in Ukraine has since continuously deteriorated, with serious consequences for the country's unity, territorial integrity and stability. 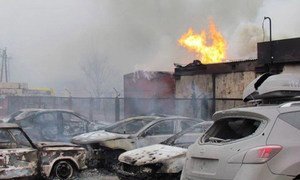 The ongoing conflict in Ukraine is proving “catastrophic” for the country's civilians amid escalating violence, indiscriminate shelling, and harsh winter conditions which have made life increasingly precarious for millions of civilians, the United Nations High Commissioner for Human Rights, Zeid Ra'ad Al Hussein, warned today.