UNDP/Dylan Lowthian
UNDP Administrator Helen Clark (centre), on a visit to Ebola-hit Liberia, is presented with her own pink jacket by members of the “Pink Panthers” motorcycle club, a group of women who ride motorbikes for a living.

17 February 2015
The top United Nations development official today began the last leg of her Ebola-recovery focused visit to West Africa a day after she witnessed the reopening of schools in Liberia and urged the international community to support “recovery from this terrible crisis” beyond the emergency phase.

Before leaving the Liberian capital, Monrovia, Helen Clark, Administrator of the UN Development Programme (UNDP), said late Monday that the crisis will not be over until there are zero cases of Ebola, which has affected more 23,000 people, with some 9,300 deaths.

“It is clear that no one will be happy until there are zero cases across all three epicentre countries,” the UNDP Administrator told a press conference in Monrovia. “But the important message now is that international solidarity with Liberia should not end at the end of the emergency phase. It must continue in support of recovery from this terrible crisis.

Noting schools had re-opened in Liberia on Monday, shuttered for more than six months to help prevent transmission, were finally re-opened, she said Liberia was emerging from a “very traumatic time”. There was now, she said, reason for hope.

Tasked by Secretary-General Ban Ki-moon to the lead the UN system's recovery efforts, UNDP is committed to working with Liberia as it follows its path to recovery in a way that is consistent with the Government and people’s own longer term development aspirations.

Among the highlights of her visit to Liberia, according to UNDP, was a meeting with Josephine Dolley, an Ebola survivor who lost 29 members of her family including her husband and three children. Ms. Dolley has adopted six children whom she met whilst in an Ebola Emergency Treatment Unit, all of them Ebola survivors who lost their parents and siblings.

The UNDP administrator also met with the so-called “Pink Panthers” motorcycle club, a group of women who offer motorbike taxi services. UNDP has been working with the women riders to find ways to make their jobs safer, including in the context of Ebola. Ms. Clark was invited to be an honorary member of the Pink Panthers, and was presented with her own pink jacket.

Ms. Clark also told the press conference that an upcoming meeting in Brussels, Belgium, would be aimed at maintaining international solidarity around achieving zero Ebola cases and considering the support needed to help Guinea, Liberia and Sierra Leone recover from the crisis.

As she began the final leg of her mission to the three-worst affected countries by the Ebola outbreak with a two-day visit to Sierra Leone, where she arrived late Monday, the UN Food and Agriculture Organization (FAO) announced that Ebola-ravaged rural communities in Guinea will benefit from new food security initiatives.

FAO said tens of thousands of people in rural areas of Guinea worst-hit by the Ebola epidemic will receive training on how to prevent the spread of the disease and support in producing food and generating income, through an agreement involving the World Bank and the country's government.

As part of the initiative, $5 million will be invested in FAO’s Ebola Response Programme, which aims to assist rural households whose livelihoods and access to food are severely threatened by the impact of Ebola.

Some 30,000 households will be sensitized on measures to counter the transmission of the disease in rural areas. Experienced rural development and extension field workers will undertake awareness activities combined with the provision of hygiene kits to rural communities.

Beneficiaries include hunters and women who used to sell bush meat but lost this source of income after authorities banned this trade in order to reduce the potential risk of exposure to Ebola through contact with wildlife. The programme will also target women groups involved in rice-processing activities.

According to the latest FAO/World Food Programme Crop and Food Security Assessment, a total of 470,000 people might be food insecure by March 2015 due to the Ebola outbreak. 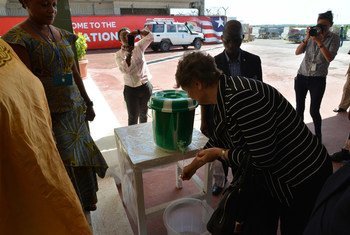 13 February 2015
The United Nations World Health Organization (WHO) announced today that it will huddle with medical teams from outside the Ebola-affected countries next week in Geneva to see how they can help in the last phases of the fight to bring the number of cases down to zero.