United Nations Secretary-General Ban Ki-moon has expressed his “deepest condolences” to the families of three Muslim Americans who were killed in the state of North Carolina earlier this week, a UN spokesperson confirmed today.

Yusor Mohammad Abu-Salha, Razan Mohammad Abu-Salha and Deah Shaddy Barakat, were reportedly shot to death on 10 February in Chapel Hill, North Carolina, sparking concerns that the three might have been targeted because of their religion. Media reports suggest that the families of the deceased believe the murders should be considered a hate crime while initial investigations cite a long-running parking dispute as the catalyst behind the incident.

Responding to questions at the daily press briefing at UN Headquarters in New York, UN spokesperson Stéphane Dujarric said Mr. Ban had been “deeply moved” by the scenes of thousands of Americans and others from around the world “coming together to mourn the lives” of the three victims.

“At a time of troubling tensions stoked by those who seek to twist the teachings of faith and sow division, these three young people represented the best values of global citizenship and active community compassion to build a better world for all,” Mr. Dujarric added.

The Secretary-General's comments reiterate multiple appeals from the UN for tolerance and acceptance amid increasing extremism throughout the world and a series of atrocities committed by groups such as the Islamic State of Iraq and the Levant (ISIL) and Boko Haram.

Last Friday, the Secretary-General's Special Adviser on Genocide, Adama Dieng, and the Secretary-General's Special Adviser on the Responsibility to Protect, Jennifer Welsh, called on on all political leaders to “exercise and encourage restrain and to refrain from incitement to hostility or violence,” and encourage religious leaders to “act responsibly” and refrain from fuelling tensions with any provocative language.

In addition, they recalled that the 2005 World Summit outcome document commitment by Member States to protect their populations from genocide, war crimes, ethnic cleansing and crimes against humanity also includes a commitment to prevent the incitement of these crimes.

World must speak out against anti-Semitism, Annan tells UN seminar

Tolerance is key to peace and fight against terrorism, UN officials say 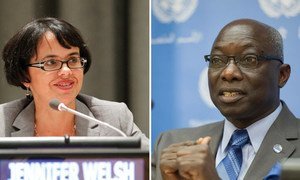 Members of the Islamic State of Iraq and the Levant (ISIL) need to know that they will be held accountable for their crimes, two senior United Nations right officials declared today, adding that recent murder of Jordanian pilot Moaz al-Kasasbeh was “yet another example of a deliberate grave abuse of human rights and international humanitarian law” perpetrated by the extremist group.