The political and economic crisis engulfing Yemen is having a dangerous impact on the country’s youths, the United Nations Children’s Fund (UNICEF) said today as it warned that increasing numbers of children are suffering from malnourishment while fewer are attending school.

Phoning in to a press briefing in Geneva earlier today, UNICEF representative in Yemen Julien Harneis said that the situation in the country had become “particularly worrying” with around 900,000 Yemeni children currently malnourished, out of whom some 210,000 were suffering from severe acute malnutrition.

Although UNICEF had previously managed to help temper outbreaks of malnourishment, Mr. Harneis added that the UN agency was facing an uphill economic challenge due to a $60 million funding gap.

Despite the formation of a new Government in November 2014 aimed at ending a period of political turbulence and bringing about a full transition towards democracy, Yemen continues to be plagued by violence and mass political demonstrations.

Just yesterday, Secretary-General Ban Ki-moon told the Security Council in New York that Yemen was “collapsing before our eyes” and that the country sat on the “brink” of outright conflict.

Mr. Ban has also voiced serious concerns about developments following the abduction by the opposition group Ansarallah of President Abd-Rabbu Mansour Hadi’s chief of staff and the resignation of the President and Prime Minister amid a takeover of the capital, Sana'a by secessionist Houthi militants. This followed a steady deterioration since the beginning of the year as Government forces clashed with militant groups throughout the capital.

At the same time, the Secretary-General cautioned yesterday that “widespread and lethal” attacks by Al-Qaida in the Arabian Peninsula (AQAP) and escalating hostilities between AQAP and the Houthis had pushed the country to the edge of civil war. These developments, coupled with a burgeoning humanitarian crisis which has enveloped an “astounding” 61 per cent of the population, now threaten regional and international peace and security.

In today’s briefing, Mr. Harneis provided an equally sobering perspective on the situation regarding children’s education in the country.

UNICEF has long noted that access to education in Yemen remains one of the biggest challenges facing children in Yemen today, particularly as the “multiplicity of localized conflicts” impacts the ability of some 200,000 children to attend school. In a situation report released in late January, UNICEF noted that in affected districts the dropout rate among children – mainly girls – is over 20 per cent.

Meanwhile, according to the same report, an estimated 7,500 children are expected to contract vaccine-preventable diseases with serious consequences, and many more children suffer repeated bouts of diarrhoea and respiratory infections.

Mr. Harneis, in fact, confirmed that the “biggest worry” regarding vaccinations is whether or not the supply chain for the vaccine against tuberculosis could be interrupted. In addition, he noted that, as a transit country for migrants coming from Africa, Yemen also remains exposed to a possible return of polio.

At the same time, the World Food Programme’s (WFP) Elisabeth Byrs also addressed the briefing, explaining the despite the “challenging operational context,” the food agency’s activities had “not been significantly affected.”

The UN Office for the Coordination of Humanitarian Affairs reports that some 61 per cent of the population in Yemen is in need humanitarian assistance – that is almost 16 million Yemenis who desperately need food, clean water and sanitation. In addition, some10.6 million people face food insecurity; 5 million of them are in a severe food crisis.

The Humanitarian Coordinator for Yemen, Johannes van der Klaauw, said today that despite the political crisis, delivering principled humanitarian assistance to all those in need is possible, especially through partnerships with various organizations. “It is essential that humanitarian aid is de-linked from the political situation.” 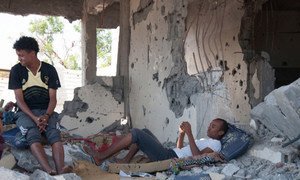 Amid a dangerous political and humanitarian crisis and a seething secessionist movement, Yemen sits on the brink of collapse, United Nations Secretary-General Ban Ki-moon warned the Security Council today, reminding the international community of its “solemn obligation” under the UN Charter to help the country prevent an escalation of the conflict and re-launch its political process.