As the international community marks the 2015 edition of World Radio Day, United Nations officials have called for the greater participation of young people in utilizing the medium as a critical tool for shaping a sustainable future.

As the international community marks the 2015 edition of World Radio Day, United Nations officials have called for the greater participation of young people in utilizing the medium as a critical tool for shaping a sustainable future.

“Young women and men are not sufficiently represented in the media -- an exclusion that often reflects a wider social, economic and democratic exclusion,” Irina Bokova, Director-General of the UN Educational, Scientific and Cultural Organization (UNESCO), said in her message for the Day.

“Young producers and broadcasters are still rare. Too few programmes are devoted to or designed by young people. This deficit explains the many stereotypes concerning young people circulating in the media and over the airwaves.”

In 2011, the UNESCO General Conference proclaimed 13 February as World Radio Day, the day United Nations Radio was established in 1946. Radio is the most prevalent mass medium, with the ability to reach up to 95 per cent of the world's population.

As a result, World Radio Day aims to celebrate radio as a medium; to improve international cooperation between broadcasters; and to encourage major networks and community radio alike to promote access to information, freedom of expression and gender equality over the airwaves. 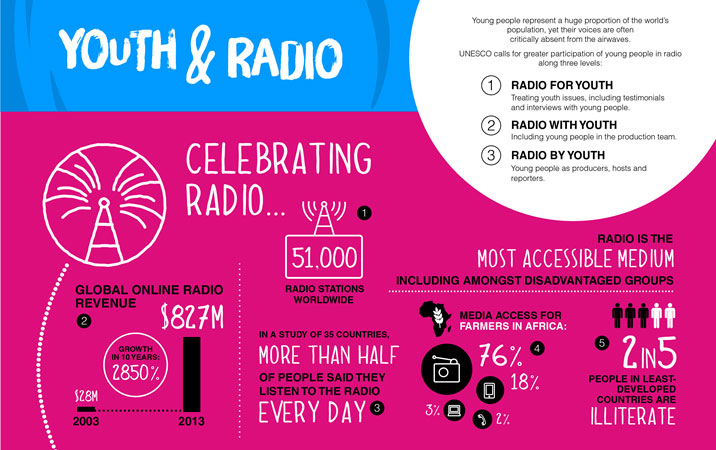 By Youth for Youth

In Safety and Security

This year, the Day's principal theme is the promotion of youth in radio, both as a conduit for the greater participation of young people in radio journalism and communications as well as encouraging the world's under-30 population in being facilitators for sustainable development.

Ms. Bokova noted that people under the age of 30 are more than half of the world's current population yet, she added, they remain underrepresented in radio, leading to exclusion, the perpetuation of stereotypes, and entrenching inequality.

As a result, UNESCO has taken the initiative to boost youth voices across the radio waves through the promotion of workshops and initiatives aimed at empowering young people around the world.

“Young people are taking action as both citizens and freelance journalists and many of the major media companies depend on their work but we need to do more,” Ms. Bokova continued. “By giving young people a voice, we can catalyse new energy to rejuvenate and develop societies. By supporting young people, through education and training in the media professions, through media content, we can help create more inclusive and prosperous societies.”

In his message for the Day, Secretary-General Ban Ki-moon similarly declared the important role radio can play for youth across the world and for the post-2015 development agenda.

“As the international community shapes new sustainable development goals and the new global agreement on climate change, we need to hear the voices of young women and men loudly, strongly and urgently.”

♦ Receive daily updates directly in your inbox - Subscribe here to a topic.
♦ Download the UN News app for your iOS or Android devices.
radio

United Nations officials have marked World Radio Day by calling for harnessing the enduring power of this vital medium to promote gender equality and women's empowerment and to amplify the voice of women over the air waves.