United Nations Secretary-General Ban Ki-moon today commended the perseverance of the leaders of Russia, Ukraine, France and Germany to bring the conflict in Ukraine to an end, resulting in the signing of a package of measures for the implementation of the Minsk accords of September 2014.

A statement issued by his spokesperson said the Secretary-General has closely followed the intensive diplomatic efforts under way in Minsk, Belarus, over the past two days. The talks have resulted in a ceasefire and, reportedly a peace roadmap towards ending the Ukraine conflict.

In that regard, Mr. Ban, according to the statement, expects that the commitments which have been made in Minsk will be respected by the parties. “He urges the parties concerned to ensure that a genuine and lasting cease-fire will commence on 15 February as agreed, paving the way for a broader political settlement of the conflict, based on the Minsk accords,” it adds.

The United Nations stands ready to assist in any way deemed helpful, the statement continues, noting that the Organization will continue to monitor the human rights situation and deliver humanitarian support to those in need.

“The Secretary-General joins the leaders of Russia, Ukraine, France and Germany in reiterating full respect for the sovereignty and territorial integrity of Ukraine,” the statement concludes.

The Ukraine crisis began to deepen in late February 2014 when it evolved from an initial internal political crisis into violent clashes in parts of the country. It later reached full- scale conflict in the east. Despite an earlier Minsk cease-fire, the situation in Ukraine has since continuously deteriorated, with serious consequences for the country's unity, territorial integrity and stability. Recent media reports have suggested a potential worsening of the situation amid claims of a massive recruitment campaign by anti-Government groups. 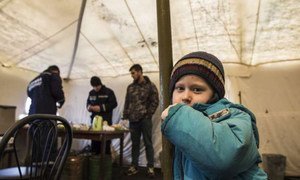 Nearly 1 million people may have now been displaced by the conflict in eastern Ukraine, with the recent upsurge in violence causing massive destruction of buildings and infrastructure, the collapse of basic services and a spike in the numbers fleeing fighting, the United Nations refugee agency reported today.