UNHCR/F. Fossi
A line of hearses wait at the harbour on Lampedusa Island to collect bodies of people who lost their lives in the 9 February 2015 high seas tragedy.
12 February 2015

The top United Nations official for refugee issues today urged the European Union (EU) to change its approach to dealing with irregular crossings of the Mediterranean Sea and make saving lives the topmost priority following the death earlier this week of some 300 people fleeing Libya on four dinghies.

“If not, it is inevitable that many more people will die trying to reach safety in Europe,” UN High Commissioner for Refugees António Guterres warned in a press release issued today by his Office (UNHCR).

“There can be no doubt left after this week’s events that Europe’s Operation ‘Triton’ is a woefully inadequate replacement for Italy’s ‘Mare Nostrum,’” said Mr. Guterres was referring to the deaths this week of at least 300 people who were trying to reach Europe from Libya on four dinghies.

“The focus has to be about saving lives,” he said. “We need a robust search-and-rescue operation in the Central Mediterranean, not only a border patrol.”

Earlier this week, the UN Special Rapporteur on the human rights of migrants, François Crépeau,

Last year, the number of people risking their lives to cross the Mediterranean on smugglers’ boats rose dramatically and many of them were fleeing conflicts or persecution in Syria, the Horn of Africa and other parts of sub-Saharan Africa, according to UNHCR.

Italy, following heavy loss of life in two incidents on the high seas in October 2013, launched the Mare Nostrum operation – rescuing tens of thousands of people. UNHCR has repeatedly expressed concern about the ending of Mare Nostrum late last year without a similar European search-and-rescue operation to replace it.

Concerned that Europe’s response to such tragedies is not to step up its rescue efforts, but to phase them out, Mr. Guterres called on the EU to urgently establish a search-and-rescue operation similar in scale and reach to Mare Nostrum.

UNHCR said it has called repeatedly on European governments to address the problem of people fleeing wars and trying to reach Europe across the Mediterranean, with a view to reducing losses of life at sea via improved surveillance and better search and rescue. 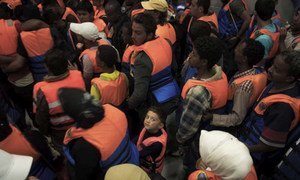 The United Nations refugee agency (UNHCR) has urged European nations to ramp up search and rescue missions in the Mediterranean Sea following the region’s first major maritime tragedy this year in which dozens of people perished, apparently from hypothermia.