The world has embarked on a “crucial last stretch” to the post-2015 development agenda and towards securing a sustainable future for all, United Nations Deputy-Secretary-General Jan Eliasson declared today, adding that the international community would finally have a chance to provide “a life of dignity” for millions of people.

“There are high expectations that the United Nations and its Member States will be a catalyst for setting the direction for transformative change,” Mr. Eliasson said this morning at a High-Level Thematic Debate on Means of Implementation for a Transformative Post-2015 Development Agenda.

“You, the Member States, are on the final stretch of an historic journey to define the content of an ambitious post-2015 development agenda.”

Addressing the debate which opened today and will wrap up tomorrow at UN Headquarters in New York, Mr. Eliasson reminded delegates that 2015 would witness the marking of “three major milestones” – the Third International Conference on Financing for Development, to be held in Addis Ababa, Ethiopia, in July; the post-2015 summit scheduled for New York, in September; and a critical UN climate conference set for December in Paris.

As momentum builds towards these events, he continued, Member States will be pressed to answer how they plan “to deliver on these ambitious goals.”

Echoing the Deputy-Secretary-General’s appeal for better financing to satisfy the “ambition, breadth and scope” of the new UN development agenda, President of the General Assembly, Sam Kutesa, warned that the additional funding needed to eradicate extreme poverty ranged from $135 billion to $195 billion every two years, while investments required in critical infrastructure projects spanning transport, energy, water and sanitation are estimated to cost between $5 and $7 trillion per year. As a result, he said, it is clear that the resources required remained “enormous” and would have to be “mobilized from all sources” – domestic and external to public and private.

“Together, we must spare no effort to formulate and agree on a framework for development and international cooperation that improves the everyday lives of people worldwide, and protects the environment.” 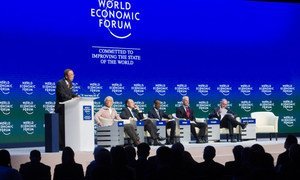 United Nations Secretary-General Ban Ki-moon today urged world leaders gathered at the World Economic Forum in Davos, Switzerland, to maintain their focus on a broad range of climate, development and gender equality issues, warning that as the global community continues to face multiple crises, the new year must be a time for ‘strong commitment’ from international stakeholders.