Opening the 2015 Government Summit in Dubai, the Secretary-General today drew attention to the world’s pressing security and development challenges, calling on Governments to help foster a more peaceful and sustainable future, and describing how the United Nations can give support.

He highlighted the international turmoil blighting the world, listing the Israeli-Palestinian conflict, instability in Libya and Yemen, and the threat of the Islamic State of Iraq and the Levant (ISIL) in Syria and Iraq among the main situations damaging prospects for long-term peace and stability.

“I have repeatedly condemned the repugnant and cowardly behaviour of those committing atrocious acts against innocent civilians,” said Mr. Ban. “At the same time, I have insisted on the need to strictly respect human rights. Any rights abuses committed in the name of counter-terror are morally wrong and strategically counterproductive.”

Radicalization would be best addressed if leaders tackled marginalization and exclusion, and listened to their people’s voices when speaking up about emergencies but also more general issues, like the need for greater transparency, accountability and democracy.

“Leaders who place themselves above the law and their people put their own governments at risk of collapse,” he warned. “True stability demands trusted institutions that deliver for people equally.”

Public institutions serving the common good are vital to efficient governance and also to improving equity, justice and stability, and he welcomed initiatives aimed at cutting red tape, lowering costs and fighting fraud.

The Secretary-General said he insisted on transparency and accountability at the UN, with the aim of creating a more modern, dynamic and responsive organisation that earned even better public trust. He disclosed his financial assets and asked all senior officials across the UN to be just as open.

As the UN marked its 70th year, he underlined the need for the Organization to better serve Governments and people, and to enable the world to take transformative steps towards a more sustainable, equitable and peaceful world.

He pointed to ongoing work to review peace operations and peacebuilding, and internal reforms for better approaches to human resources, technology and management, all of which would serve the overarching goal of enabling the UN to help better implement the sustainable development goals.

Listing the Third International Conference on Financing for Development in Addis Ababa in July, the special summit on sustainable development in New York in September, and the climate change conference in Paris in December, he underlined their significance and the opportunity they offered Governments to make ambitious plans for a more sustainable future.

“We are the first generation that can end poverty and maybe the last that can avert the worst impacts of climate change,” he said. “The success of these plans will depend on accountable and transparent governments that engage people in decisions affecting them.”

States would have more opportunity than ever to cooperate with civil society groups in policy-making and should also involve more citizens in co-designing solutions to development challenge.

“This new epoch calls for a new governance model – one that is ready for the future, accountable, transparent, inclusive and participatory,” he urged. “Our discussions at this Government Summit can help realize that vision and usher in a life of dignity for all.” 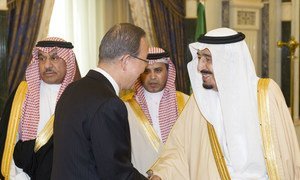