6 February 2015
South Sudan is on the brink of a major food insecurity crisis as millions of people remain trapped by the country’s ongoing internecine fighting, the United Nations Food and Agriculture Organization (FAO) has warned.

The report comes as a host of senior United Nations officials, including Valerie Amos, Under-Secretary-General for Humanitarian Affairs and Ivan Šimonović, Assistant Secretary-General for Human Rights, along with Academy Award winning actor Forest Whitaker, who is the Envoy for Peace and Reconciliation of UN Educational, Scientific and Cultural Organization (UNESCO).

Back in the country for the first time in over a year, Ms. Amos said she is “extremely concerned” about the humanitarian situation. “I hope that being here, particularly with Mr. Whitaker, we can continue to give attention to what is happening to people and use that as a way of raising resources for the urgently needed humanitarian action that we need to take this year.”

“It’s too early to tell if things will get any better this year,” she told reporters in Juba. “I’m a little disappointed that the peace talks are still ongoing. I hope that will be resolved soon because that’s the thing that is going to make the biggest difference to the people of South Sudan.”

The FAO report, which details the varying levels of food insecurity across the young African nation, spotlights the UN’s concern, noting that 2.5 million people – or, one-fifth of the population – classify as being in either “Crisis” or “Emergency” level food insecurity while an additional 3.9 million are suffering from food insecurity “Stress.”

The security situation in South Sudan has steadily deteriorated since political in-fighting between President Kiir and his former deputy, Mr. Machar, started in mid-December 2013. The hostilities subsequently turned into a full-fledged conflict that has sent nearly 100,000 civilians fleeing to United Nations bases around the country.

Although a tense ceasefire is currently in place, the FAO has cautioned that according to seasonal patterns, the food crisis is expected “to deepen and the risk of a dramatic deterioration will be greatest between April and July this year” during the country’s “lean season.”

The fragile situation in South Sudan has mobilized the entire UN system as numerous agencies are currently on the ground providing humanitarian relief. Working with the World Food Programme (WFP), UN Children’s Fund (UNICEF) continues to step up aid for malnourished children across South Sudan. UNICEF and partners provided therapeutic feeding treatment for almost 100,000 severely malnourished in 2014 and are aiming to reach 137,000 children under five suffering from severe acute malnutrition in 2015.

UNICEF and WFP are also flying in expert teams to remote locations that are cut off from humanitarian aid, in what is called Rapid Response Missions. During these missions, UNICEF screens children for malnutrition and refers and treats those who are moderately and severely malnourished.

Against that backdrop, the FAO has urged donors to provide an additional $32 million in funding in order to maintain and expand its current operations on the ground while also providing the agency with resources to procure supplies for the coming year.

“We have to continue to invest on two tracks,” Ms. Lautze continued. “One, provide humanitarian aid to prevent the most affected areas from sliding into greater crisis and, two, boost food production and local economies in the more stable areas, so they can support recovery in other parts of the country.”

Over the past year, the FAO has already reached over 3.2 million people with more than 570,000 livelihood kits containing portable, essential inputs, including vegetable seeds, crops seeds and tools, animal health equipment and fishing inputs that have been reaching affected communities by truck and airdrop.

For his part, Mr. Whitaker noted that many of the schools have been shut down because of the ongoing fighting. “Right now, we’re trying to bring attention to that…and [show] that we need to advance education to allow people to heal during this process of peacebuilding that’s hopefully going to be happening. I’m hoping that we’ll be able to find a place where children can go to school and find peace in their lives and all aspects of their well-being,” he added. 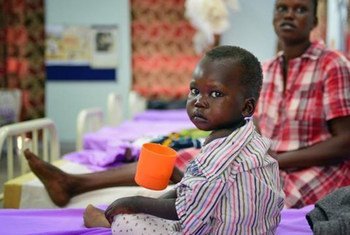 4 February 2015
The ongoing conflict in South Sudan is sharply reducing food supplies and slowing humanitarian access to people in need, the United Nations children’s agency (UNICEF) said today, urging warring groups in the country to follow up quickly on the ceasefire deal agreed on Monday.