The United Nations World Food Programme (WFP) has announced today that it is scaling-up its efforts in Malawi, following weeks of devastating floods that have displaced large numbers of people and presented complex challenges for that country’s Government.

“While we may not be able to prevent disasters from taking place, we can do much more to mitigate their impact on people and economies,” Mr. Antoine told the Assembly this morning at a meeting organized by the UN Office for the Coordination of Humanitarian Affairs (OCHA). The world must not let the “increasing humanitarian crises around the world” take away from addressing a very serious situation unfolding in Malawi, he added.

“Since the beginning of the rainy season last October, more than 100,000 people in southern Africa region have been displaced or affected by floods and storms,” said Mr. Antoine. Although countries in the region are leading humanitarian efforts with the assistance from the UN and its partners, the international community must do more to “support a full recovery.”

Malawi’s Minister of Lands and Housing also participated in the briefing via video link from his country’s capital, Lilongwe. Also joining in was the UN Resident Coordinator in the country and other members of the UN country team who provided details on the situation on the ground.

The situation is expected to get worse before it gets better, with downpours forecast for the next several days. This year’s rains have come ahead of their usual schedule, repeatedly bursting the banks along the Shire and Ruo rivers.

In a note, WFP today said more resources are urgently required to fill the funding gap. The Programme is currently working to bring food to an additional 160,000 people who have been affected by the floods. This week alone, it plans to dispatch food to Mangochi, Thyolo, Chiradzulu, Blantyre, Salima and Balaka districts.

It is delivering maize, beans, vegetable oil and ‘Super Cereal’ (a flour-fortified with vitamins and minerals). Meanwhile, it has also provided 28 metric tons of High-Energy Biscuits to more than 34,000 people in Chikhwawa and Nsanje districts. The fortified biscuits are often used in emergencies when people have no access to cooking facilities.

The WFP has been able to reach hard-to-reach areas of the hardest hit areas of Chikhwawa and Nsanje using its own helicopter. By the end of January, it had reached nearly 210,000 people with more than 1,500 metric tons of food assistance in eight districts. 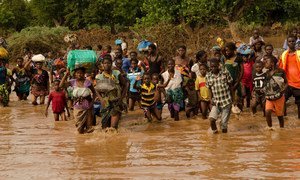