Underlining the importance of the partnership between the African Union and the United Nations in Somalia, which he called “unique, strong and essential for success,” the top UN official there briefed the Security Council today on the challenges lying ahead for the country in 2015.

“This year will be decisive in whether and how Somalia can become a unified, peaceful and federal State,” said Special Representative of the Secretary-General in Somalia Nicholas Kay, expressing excitement but also worry over risks on the horizon. “Delays and setbacks will have an even greater impact this year than last.”

Mr. Kay said federalism and the Government’s ‘Vision 2016’ initiative are vital to the plan for the year ahead, but he acknowledged that repeated political crises have shortened the timelines for their fulfilment significantly. Momentum gained in 2014 had to be maintained, particularly building the capacity of Interim Regional Administrations and establishing such bodies where none exists.

The review of the Constitution, including important discussions on power and resource sharing, would need to be completed this year, with a Constitutional Referendum planned for early 2016. Other key decisions and preparations for that exercise and for elections also had to be made. Of particular importance was establishment of the National Independent Electoral Commission and the Boundaries and Federation Commission. 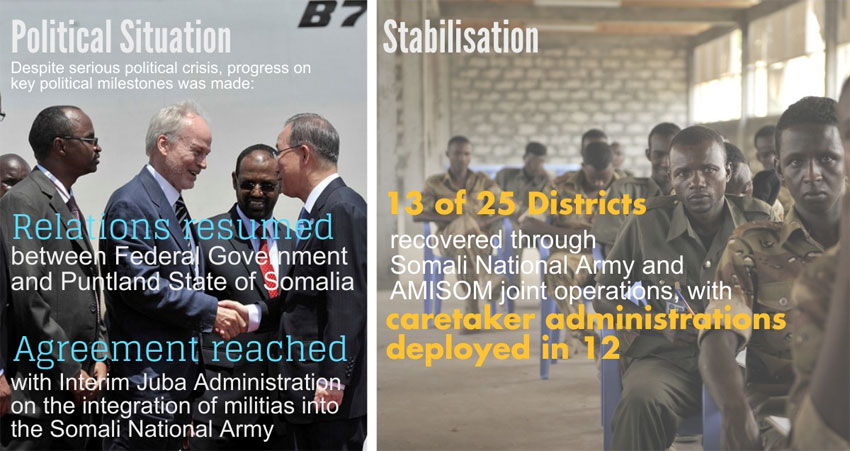 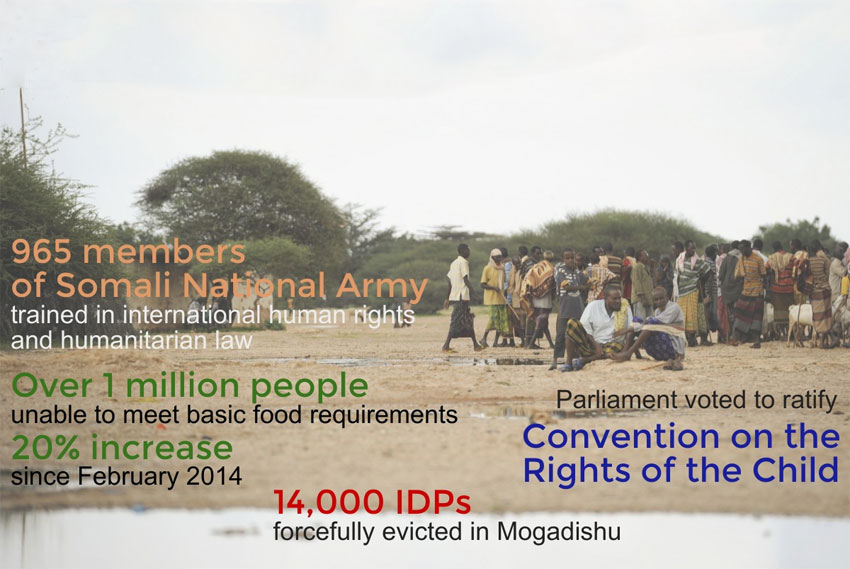 “We must continue to support and build the Federal Government’s leadership and capacity,” Mr. Kay continued. “But inclusive political processes will be the key. Somalia’s regions must play a full part in State-building and peacebuilding processes.”

He also stressed the importance of involving minority and marginalized groups, as well as women in the processes and he underlined the need to avoid political infighting, divisions and distractions.

“I worry that tensions will rise as the 2016 elections get closer,” noted Mr. Kay, stressing that it is up to Somalia’s political leaders to guide the process responsibly, build confidence among all groups and put aside narrow interests. “A spirit of compromise is the hallmark of strength, not weakness.”

He paid tribute to the work of the AU Mission in Somalia (AMISOM) and the Somali National Army, as well as the UN Support Office for AMISOM (UNSOA), looking forward to advances in the campaign against Al-Shabaab and improvements to the security situation for Somali civilians.

“Stabilisation has to work this year,” he said. “I look forward to greater implementation of the Federal Government’s stabilization strategy, particularly local reconciliation and peacebuilding activities.”

With the country remaining one of the most dangerous in which the Security Council has mandated operations, Mr. Kay, who heads of the UN Assistance Mission there, known as UNSOM, praised the vital work of the UN Guard Unit, which allowed the UN to expand its presence in Mogadishu. That expansion, however, pushed the Unit to the limits of its capacities and with demands upon it set to increase further as more effort was made to achieve stabilization and to fulfil Vision 2016, the Unit needed strengthening.

Welcoming Somalia’s recent ratification of the Convention on the Rights of the Child, he stressed the need for improved human rights for children and women and for the building of institutions like the Human Rights Commission. He also warned against complacency about the humanitarian situation.

“Somalia is still teetering on the edge,” Mr. Kay said. “In 2015, we must see concerted action by the Federal Government and international partners to pull it back from the brink.”

Malnutrition rates are “stubbornly high” in Somalia with more than 200,000 children requiring emergency nutrition, the top United Nations humanitarian official in the African nation said today as he projected a “worrisome” outlook for 2015.