UN Photo/Eskinder Debebe
Secretary-General Ban Ki-moon (centre) holds a press conference at the end of his visit to Ethiopia for the 24th Summit of the African Union in Addis Ababa, January 2015.
31 January 2015

United Nations Secretary-General Ban Ki-moon today welcomed the decision of the African Union to join forces to stop the advancement of the “murderous campaigns” waged by Boko Haram, as he stressed the importance of the continent's collaboration with the UN, emphasizing that “lives depend on preventive-diplomacy and peacekeeping.”

Mr. Ban is in Addis Ababa, Ethiopia, this weekend for the African Union (AU) Summit, a gathering of the continent's 54 nations, to discuss daunting challenges including the growing threat of Boko Haram. At the Summit's closing today, African leaders pledged to join forces to fight the terror group, which has in recent weeks attacked villages in Cameroon, displacing thousands to neighbouring countries and sparking fears that its insurgency was expanding beyond Nigeria.

Speaking to reporters today, the UN chief said he supported the AU's plan to fight the terror group with the establishment of a Multinational Joint Task Force, which must remain consistent with UN human rights due diligence policies.

“The murderous campaign waged by Boko Haram demands stronger and more coordinated action from us all,” Mr. Ban said.

“Regional and international efforts must focus on protecting communities in northern Nigeria and across borders. More than a million internally displaced people and refugees must be able to return home,” the Secretary-General added, reiterating his call for the immediate release of those who have been abducted, particularly the girls from Chibok.

Collaboration on peace and security is essential to the UN's partnership with the AU in that more than 80 per cent of UN peacekeepers are deployed on the continent. Mr. Ban said that through the UN-AU partnership, progress has been made in Burkina Faso, the Central African Republic, Mali, Somalia and South Sudan. More, however, could be done by working “even more closely together”.

Such close partnership has paid off in the fight against the Ebola epidemic, Mr. Ban continued, commending the AU for being on the “front lines” of fighting the deadly virus. Efforts are paying off and while “we are beginning to turn the tide,” Ebola is far from over.

“We must continue to demonstrate the same solidarity until Ebola is gone from every country, and throughout the next phase of recovery,” the UN chief said.

After all, he continued, peace and development go hand-in-hand. Africa has made substantial progress in achieving the Millennium Development Goals and has the opportunity this year, like the rest of the world, to commit to a new post-2015 development agenda and a universal agreement on climate change.

“African families, communities and economies have much to gain from both these historic agreements,” Mr. Ban continued, urging leaders of the continent to “listen to their people and respect their wishes and aspirations”.

Several African countries will hold elections this year, he said, pledging that the UN and AU will work together to support nations to organize peaceful and credible polls. Mr. Ban also urged leaders to respect constitutional and legal limits on their terms of office.

Mr. Ban also strongly condemned the terrorist attacks in North Sinai, earlier this week which killed dozens of people, including civilians, and injured scores of others.

In his remarks to a meeting on ensuring peace and security in the Democratic Republic of the Congo (DRC), the Secretary-General said that despite progress made in “stamping out” the activities of armed groups, scores of civilians have been killed in recent months in the Beni area.

This only underscores the importance of eradicating all illegal armed groups from the region, Mr. Ban told the Fifth Meeting of the Regional Oversight Mechanism of the Peace, Security and Cooperation Framework for the DRC and region. Welcoming the use of military force against the Democratic Forces for the Liberation of Rwanda, or the FDLR, he added, that while “military action will not resolve this issue,” it is vital to eliminate the threat posed by the FDLR once and for all.

The Secretary-General also expressed concern at the slow progress in implementing the Nairobi Declarations. More than a year after those accords were signed, the amnesty and repatriation of eligible former fighters from M23 and other armed groups have not been completed. Governments of the DCR, Rwanda and Uganda must to intensity efforts to complete this process.

Also today in a meeting with Mali's Foreign Affairs Minister, Mr. Ban deplored the recent incidents in Gao, in the northern part of the embattled country. He reiterated the UN's commitment to work closely with the Malian Government to find out exactly what happened and encouraged the Government to continue to lead the peace process. Meanwhile, the Malian Minister, Abdoulaye Diop, reiterated his Government's support for the UN's peacekeeping mission in the country, known as MINUSMA. 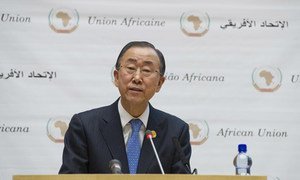 Addressing the African Union (AU) Summit in Addis Ababa, Ethiopia, at the start of what he called a “crucial year for global action to secure our global future,” the United Nations Secretary-General today said he looked forward to African countries realizing their massive cultural, human and economic potential.