“The flooding has displaced large numbers of people and presents massive and complex challenges for Governments and their humanitarian allies in the short, medium and longer-term,” Mr. Beyani said.

“Evacuation of affected populations should be undertaken where necessary to save lives, and an effective humanitarian response is essential to address the needs of internally displaced people and others affected,” he continued. “Helping people to return and reconstruct devastated homes - when circumstances allow - will be just one challenge among many to rebuild lives and livelihoods and should be part of a broader recovery plan.”

Malawi is regularly hit by floods and droughts, requiring emergency responses of varying size each year. This year, flooding has caused displacement of over 170,000 people, while an estimated 116,000 households have lost their crops and livestock. In Nsanje district alone, 79 people are confirmed dead with another 153 people still missing.

This year's rains have come ahead of their usual schedule, repeatedly bursting the banks along the Shire and Ruo rivers, and warnings of flash floods remain in place, with more rain forecast for the country's North. With 86 per cent of the population living in rural areas and engaged in farming and livestock rearing, long-term watershed management infrastructures are urgently needed so that even intense flooding is less damaging than this year.

“The impact of flooding on food security poses immediate problems as well as potentially severe food shortages for months to come, as crops have been washed away and livestock lost,” warned Hilal Elver, who explained that the country's poor rural communities had “lost everything and require early assistance to prevent hunger and malnutrition.”

According to an initial estimate, S3.4 million is needed to respond to urgent healthcare needs and prevent and control outbreaks of disease.

UN expert, Léo Heller, pointed out that accessibility to clean water would be critical in the coming weeks and months in order to stave off the threat of disease.

“Safe water, sanitation and hygiene must be provided urgently for the survival of those affected, prioritizing the most vulnerable groups, but also for the prevention of water-related diseases such as cholera and malaria,” he added. 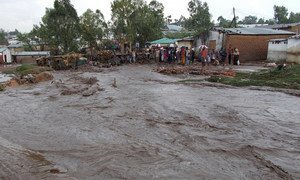 The United Nations agriculture agency is working closely with Malawi’s Government on a $16 million response plan aimed at protecting farmers from severe flooding that has destroyed fields and homes, washed away animals and crops, and threatens local food security.