FAO/A.K. Kimoto
A woman casting a fishing net from a boat on the Tonle Sap River, Cambodia.
29 January 2015

The world's network of lakes, rivers and streams that provide fish and fresh drinking water to millions of people must be better managed in order to safeguard their ongoing contribution to healthy diets and the global economy, the United Nations Food and Agriculture Organization (FAO) urged today.

“Inland fisheries provide a valuable but often overlooked source of nutrition and employment around the world,” Árni M. Mathiesen, FAO Assistant Director-General in the Fisheries and Aquaculture Department, explained in a press release.

“But to date, the international effort to effectively integrate inland fisheries into the broader development agenda has fallen short of what is needed.”

Mr. Mathiesen's appeal comes as the UN food agency and international stakeholders – from researchers to indigenous groups – wrapped up the Global Conference on Inland Fisheries, concluding that a dearth of data and sound policies had resulted in development decisions which failed to take into account adverse impacts on inland fisheries.

According to the FAO, lakes and rivers are an “essential source” of protein, micronutrients, vitamins and fats for millions of people, particularly in developing countries, where more than 60 million people rely on them for their livelihood. An estimated 71 low-income countries, in fact, currently produce nearly 7 million tonnes a year, or 80 per cent of so-called global inland captures.

In addition, much of the nutrition garnered from inland fisheries is ultimately critical in supplementing the incomplete diets of many of the world's poor. Some 800,000 children die each year from zinc deficiency; 250 million children worldwide are at risk of vitamin A deficiency; and almost a third of the world's population is iron deficient.

At the same time, the UN agency noted, these bodies of water are frequently impacted by other human needs, including energy creation, tourism and competition for freshwater, which can damage the delicate ecosystems in play.

“We hear a lot about the threats to coral reefs, but freshwater fish are the most threatened group of vertebrates used by humans,” Mr. Mathiesen continued.

Currently, less than half of international or shared inland water bodies have international agreements on their management and only 11 per cent have a mandate covering fish, the FAO said.

Experts who attended the Global Conference called on the international community to boost the number of accords aimed at ensuring freshwater resources are used “sustainably and smartly.” 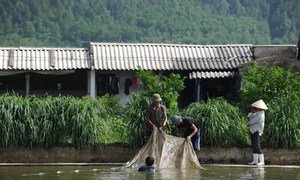 An upsurge in fish farming is expected to provide millions of people in developing countries with better access to improved nutrition over the coming decade, a new report released by the United Nations Food and Agriculture Organization (FAO) has confirmed.