The United Nations Security Council today condemned in the strongest terms the deadly terrorist attack against the Corinthia Hotel in Tripoli, Libya, and underlined the need to bring the perpetrators, financiers and sponsors of such “reprehensible” acts to justice.

In a statement issued to the press in New York, members of the Security Council strongly condemned the incident and expressed deep sympathy and condolences to the families of the victims of this heinous act, and wished a speedy recovery to those injured.

Press reports suggest that at least three people were killed and half a dozen or more were injured today in a car bomb explosion and gun attack against the Corinthia Hotel, which is located in the heart of Libya's capital, Tripoli.

The deadly attack comes as the second round of political talks among Libyan parties wrapped up in Geneva in what the UN described as a “positive atmosphere” where, as part of the discussions, the participants “called on all Libyans to stand united against terrorism.”

For its part, the Security Council reaffirmed that terrorism in all its forms and manifestations constitutes one of the most serious threats to international peace and security, and that any acts of terrorism are criminal and unjustifiable regardless of their motivation, wherever and whenever and by whomsoever committed.

Further, Council members reiterated their determination to combat terrorism and urged all States, in accordance with their obligations under international law and relevant Council resolutions, to cooperate actively with relevant regional authorities in this regard.

The Council also reaffirmed full support for Special Representative of the Secretary-General, Bernardino León, and urged all the parties in Libya to engage constructively with his efforts to resume an inclusive political process aimed at addressing the political and security challenges facing the country.

The Council's call for constructive engagement comes as participants in the Libyan dialogue facilitated by the UN Support Mission in Libya (UNSMIL), which Mr. León heads, concluded two days of discussions held at the Palais des Nations in Geneva.

According to a press statement from UNSMIL, the discussions were conducted in a positive atmosphere reflecting the sense of national responsibility and a sincere determination to find solutions to end the political and military conflict buffeting their country.

Participants, continued the Mission, discussed the issue of the formation of a consensual national unity government to ensure the unity of the country and State institutions. This includes the government's mandate, program, the decision-making process as well as the criteria for selecting its members.

“Participants also discussed how this government could benefit from UNSMIL support to carry out its tasks and the guarantees the international community could provide in this regard and in dealing with anyone who obstructs the political and security process,” said the statement.

In addition, UNSMIL notes that the parties to the talks were unanimous in rejecting terrorism.

“They strongly condemned the attack that targeted a hotel in Tripoli…causing a number of casualties among Libyans and foreigners, as well as other terrorist attacks against civilians across the country,” said the Mission, adding that the parties emphasized that such attacks would not derail the political process and would in fact create an incentive for all the Libyan sides to forge ahead with efforts to stabilize the country.

“The participants called on all Libyans to stand united against terrorism and send a clear message that terrorism has no place in a new Libya for which the Libyans have sacrificed so much,” said UNSMIL in its news release. 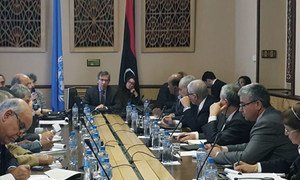 Libya: latest round of UN-mediated peace talks kick-off in Geneva

Libyan parties have gathered in Geneva, Switzerland, today for a new round of United Nations-facilitated talks aimed at resolving the north African nation's political crisis.