UNRWA Archives/Shareef Sarhan
UNRWA expects and is preparing for some 65,000 to 70,000 Palestinians to stay in its Gaza schools as they have no homes and nowhere to return to.
27 January 2015

The United Nations agency tasked with assisting Palestinian refugees across the Middle East announced today that a major funding shortfall has forced the suspension of its cash assistance programme that would have helped families in Gaza repair their homes and provide rental subsidies to people left homeless after last year's conflict in the enclave.

Announcing the suspension, the UN Relief and Works Agency (UNRWA) said in a press release “virtually none” of the funds pledged by donors at an international conference in Cairo last year has reached Gaza, and that it will need some $100 million in the first quarter of 2015.

Over 96,000 Palestine refugee family homes were damaged or destroyed during last summer's conflict and overall, $720 million is required to address this need, according to UNRWA. To date, the agency has received only $135 million in pledges, leaving a shortfall of $ 585 million.

“People are desperate and the international community cannot even provide the bare minimum – for example a repaired home in winter – let alone a lifting of the blockade, access to markets or freedom of movement. We've said before that quiet will not last, and now the quiet is at risk,” said Robert Turner, the agency's Director in Gaza.

While some funds remain available to begin the reconstruction of totally destroyed homes, UNRWA has exhausted all funding to support repairs and rental subsidies.

“UNRWA in Gaza has so far provided over $77 million to 66,000 Palestine refugee families to repair their homes or find a temporary alternative,” Mr. Turner said, emphasizing that while this in itself is a "tremendous achievement," it is wholly insufficient.

"It is easy to look at these numbers and lose sight of the fact that we are talking about thousands of families who continue to suffer through this cold winter with inadequate shelter. People are literally sleeping amongst the rubble; children have died of hypothermia," he stressed.

Of the $5.4 billion pledged at the Cairo conference last October to help Palestinians rebuild from last summer's war, "virtually none of it has reached Gaza," he added.

“It is unclear why this funding has not been forthcoming,” said Mr. Turner. “But UNRWA has been a stabilizing factor in a very challenging political and security context and if we cannot continue the programme, it will have grave consequences for affected communities in Gaza.”

The Agency warned that if did not receive the $100 million, it would not be able to continue to provide rental subsidies fearing that large numbers of families may return to the collective centers, where almost 12,000 displaced Palestinians continue to seek shelter. 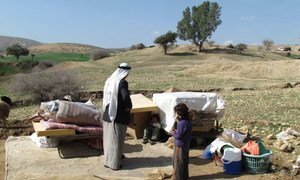 The United Nations Resident and Humanitarian Coordinator for the occupied Palestinian territory expressed concern today over the Israeli authorities’ recent spate of demolitions of Palestinian homes in the West Bank, including East Jerusalem.