“These children have been forced to do and see things no child should ever experience,” UNICEF South Sudan Representative Jonathan Veitch stated in a press release. “The release of thousands of children requires a massive response to provide the support and protection these children need to begin rebuilding their lives.”

An initial group of 280 children – ranging from 11 to 17 years of age – were released by the South Sudan Democratic Army (SSDA) Cobra Faction at the village of Gumuruk in South Sudan's eastern Jonglei State. The release was marked by a ceremony overseen by UNICEF and the South Sudan National Disarmament, Demobilization and Reintegration Commission during which the child soldiers reportedly surrendered their weapons and uniforms. Further phased releases of the other children are planned over the coming month.

According to the UN agency, some of the child soldiers have been fighting for up to four years and many have never attended school. In the last year alone, 12,000 children, mostly boys, have been recruited and used as soldiers by armed forces and groups in South Sudan as a whole.

The security situation in South Sudan deteriorated steadily over the past year since political in-fighting between South Sudan's President Salva Kiir and his former deputy, Riek Machar, started in mid-December 2013. The hostilities subsequently turned into a full-fledged conflict that has sent nearly 100,000 civilians fleeing to UNMISS bases around the country. The crisis has uprooted an estimated 1.9 million people and placed more than 7 million at risk of hunger and disease.

Nonetheless, a recent peace deal between the warring factions has fostered hope of a definitive end to the year-long conflict.

In its press release, UNICEF explained that it is currently working to trace and reunify the children with their families, a “daunting” task due to the more than 1 million children who have either been displaced internally or have fled to neighbouring countries since fighting broke out.

In the meantime, the UN agency is supporting the former child soldiers with basic health care and protection services and necessities such as food, water and clothing to help them get ready to return to their families. Moreover, counselling and other psychological support programmes are urgently being established as well as access to education and skills training programmes.

Mr. Veitch warned, however, that the successful application of such programmes demanded significant resources.

UNICEF, in fact, estimates the costs for the release and reintegration of each child at $2,330 for a two-year period. Although some funding has been forthcoming, the agency is appealing for an additional $10 million.

For her part, Leila Zerrougui, the UN Special Representative for Children and Armed Conflict, celebrated the demobilization, adding that the release of the child soldiers was “a step in the right direction.”

“Helping them take back their lives must be a priority,” she declared in a statement. “I call on the international community to provide sufficient resources to ensure they have access to the support that will help them heal and return to a peaceful life.”

South Sudan is one of seven countries highlighted in the UN's ongoing “Children, Not Soldiers” campaign which aims to end the recruitment and use of children by Government armed forces in conflict by the end of 2016. During the Special Representative's visit to South Sudan in June 2014, the Government recommitted to the full implementation of its action plan with the United Nations to end the recruitment and use of children in the Sudan People's Liberation Army. In May, Riek Machar, signed a commitment with the Special Representative to end all grave violations against children.

“Today's release of children is a step in the right direction, but we cannot forget that thousands more have been recruited by all parties to the conflict,” Ms. Zerrougui continued. “I urge the Government of South Sudan and the opposition led by Riek Machar to honor their commitments. The release of children in their ranks is long overdue.” 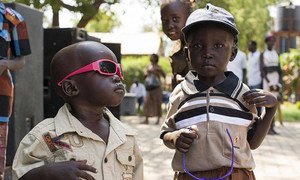 The conflict in South Sudan has seriously hampered the protection of children, increasing their vulnerability dramatically, says a new report published this week by United Nations Secretary-General Ban Ki-moon.