OCHA/Gemma Cortes
Skirmishes in Central African Republic between armed groups in the Batangafo area are leaving an influx of newly displaced people in town and thousands more on major roads in the region.
27 January 2015

The top United Nations humanitarian official in the Central African Republic (CAR) is calling for increased protection of displaced communities in the northern town of Batangafo, where relief agencies are working hard to ease suffering as the country's ongoing conflict drives a steady stream of terrified people into the area seeking safety.

Senior Humanitarian Coordinator Claire Bourgeois visited Batangafo over the weekend to assess the increasing protection needs in the area caused by a continuous influx of newly displaced persons (IDP). There are now more than 30,000 IDPs in the main site of the city, according to the UN Office for Coordination of Humanitarian Affairs (OCHA).

After visiting the overcrowded displacement site in Batangafo – which daily receives hundreds of people driven from their homes by violence – Mrs. Bourgeois, in a press release today, stressed the urgent need to restore State authority in the town.

While impressed by the way the humanitarian response is organized by the Danish Refugee Council and Médecins Sans Frontières Spain, and by the active role played by the Committee of Wise Men and the Transhumance Committee, she nevertheless emphasized that immediate action is needed to ensure the safety and protection of civilians who are at severe risk of attacks in the region, especially in the western area.

"This will stop the daily influx of hundreds of displaced people arriving at the site searching for safety; it will facilitate the return to their places of origins; and, at the same time, will enable humanitarian actors to reach people in need in areas where activities are now interrupted due to safety concerns,” Mrs. Bourgeois said.

Mrs. Bourgeois was accompanied on her visit by representatives of the Ministry of Humanitarian Affairs, as well as the UN Children's Fund (UNICEF), UN Population Fund (UNFPA), UN refugee agency (UNHCR), World Health Organization (WHO), and other humanitarian partners.

The delegation met with the Committee of Wise Men, representatives of the Pheul community, non-governmental organizations and IDPs themselves in Batangafo, to discuss their basic needs and the challenges impeding their return to their places of origin.

OCHA notes that the most urgent needs identified were: improvement of the security and protection of civilians, and assistance to newly arrived displaced people. The mission participants called on all parties to the conflict to respect international humanitarian law and protect civilians and humanitarian workers in CAR.

“The world needs to wake up to the enormity of the crisis in CAR. This is one of the most serious humanitarian emergencies in the world. We urgently need more action and more commitment. Action to protect civilians must be the top priority for all actors,” Mrs. Bourgeois added.

Her strong call comes following the launch last Friday by UNHCR of its latest funding appeal to help more than 450,000 Central African Republic refugees struggling to survive across the region. The $331 million appeal presented seeks to provide safety, food, clean water, shelter, health and other basic services to people, which the agency expects will be seeking refuge in Cameroon, Chad, the Democratic Republic of the Congo (DRC) and Republic of the Congo by the end of the year.

More than two years of civil war and sectarian violence have displaced thousands of people in the CAR amid continuing clashes between the mainly Muslim Séléka alliance and anti-Balaka militia, which are mostly Christian CAR faces a humanitarian crisis of major proportions. Nearly a million people have been displaced and 2.7 million people, over half of the population, are in dire need of immediate assistance. 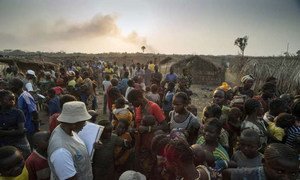 The United Nations refugee agency (UNHCR) has launched its latest appeal for funding as it continues working to help more than 450,000 Central African Republic refugees struggling to survive across the region, an agency spokesperson said today.