The Secretary-General's Special Representative in Haiti, Sandra Honoré, and other members of the international community represented in the “Core Group” – comprising the Ambassadors of Brazil, Canada, France, Spain, United States, and the European Union, as well as the Special Representative of the Organization of American States – today welcomed the installation of Prime Minister Evans Paul, the formation of the Government, as well as the establishment of the Provisional Electoral Council (CEP).

In a press release, Ms. Honoré and the “Core Group” encouraged the new Government to create “the political and security conditions necessary to guarantee the organization of fair, credible and inclusive elections” and said that the Group's members were “pleased” that the newly established CEP could pursue its activities in “full independence, with a view to guaranteeing the transparency and impartiality of the electoral process.”

In addition, the press release added, the “Core Group” continued to support the efforts of all stakeholders “to reinforce stability, consolidate democracy and restore the functioning of the country's institutions.”

As a result, the UN Stabilization Mission in Haiti's (MINUSTAH) mandate was immediately increased to help the country's recovery, reconstruction and stability efforts. The Security Council subsequently requested MINUSTAH to further provide logistical support and technical expertise to assist Haiti's Government to continue operations to build the capacity of its rule of law institutions at the national and local level. 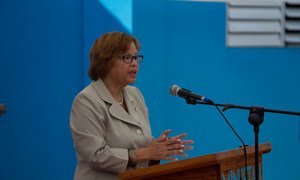 Urging all Haitian stakeholders to form a consensus Government, the top United Nations official in in the country joined the ambassadors of several countries today in deploring the fact that the Haitian Parliament became “dysfunctional” after failing to hold elections within its constitutional framework.