The top United Nations official in Libya, Bernardino Léon, has condemned a fatal shooting incident outside a UN facility in the capital, Tripoli, as tensions continue to simmer across the war-torn country.

The top United Nations official in Libya, Bernardino Léon, has condemned a fatal shooting incident outside a UN facility in the capital, Tripoli, as tensions continue to simmer across the war-torn country.

In a statement issued earlier today, Mr. Léon reported that on the morning of 23 January, unidentified gunmen opened fire from a passing car at members of the Diplomatic Police guarding the offices of the UN Development Programme (UNDP). One policeman was mortally wounded.

“The Diplomatic Police are investigating to determine the circumstances and the motives behind this drive-by shooting,” Mr. Léon's statement continued, adding that UN staff were not involved in the incident.

Yesterday's attack is the latest outburst of violence to breach the recent ceasefire announced following a first round of intensive talks, hosted by UNSMIL in Geneva, during which participants agreed upon an agenda for discussions going forward, with the aim of reaching a political agreement to form a consensual national unity government, and making security arrangements necessary to end fighting and ensure the withdrawal of armed groups from Libyan cities. 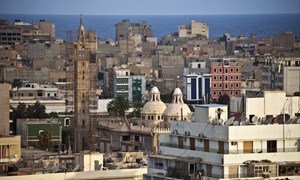 The United Nations Support Mission in Libya (UNSMIL) today condemned the reported armed attack against the country’s Central Bank branch in the eastern city of Benghazi.