WFP/Dannie Phiri
With their homes inundated, these families have been forced to seek refuge in Mikolongo school in Chikwawa district which now shelters more than 200 households.
23 January 2015

The United Nations World Food Programme (WFP) announced today that it has begun distributing high-energy biscuits in Malawi following the devastating flooding that displaced more than 100,000 people and reportedly killed at least 50 others in recent weeks.

Some 77 metric tons of biscuits – enough to feed 77,000 people – were airlifted into the Southern Africa country from the UN Humanitarian Response Depot in Dubai earlier this week, according to a WFP press release, which added that this ready-to-eat food would be prioritized for the most vulnerable people, particularly youths.

Among the poorest countries on earth, Malawi has one of the highest rates of stunting among children.

Meanwhile, the latest figures from the country’s Government-led food security cluster indicate that some 370,000 people currently require urgent food and other relief assistance due to the flooding.

The UN agency explained that reaching the worst-affected areas with such assistance had become “extremely difficult” as many roads and bridges had been damaged or washed away.

Within days of the President of Malawi declaring a disaster in 15 of the country’s 28 districts, WFP began to deliver maize, beans, oil and super-cereal – a fortified corn blend – from in-country stocks to those displaced in Chikwawa district of Malawi on Saturday. However, the agency has stressed that the stocks will need to be replaced once the crisis is over.

In addition, the WFP warned that $18 million in urgent funding is still required in order for it to be able to continue its assistance to Malawi’s flood victims. 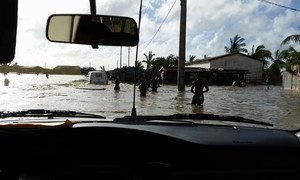 With Malawi, Mozambique and Madagascar continuing to face torrential rains and worsening floods, United Nations agencies are scaling up relief efforts to assist those affected and displaced in the southern African countries.