UNHCR/B. Sokol
Testing refugee children for signs of malnutrition in an encampment on the banks of the Oubangi River in Equateur province, DR of Congo.
23 January 2015

The United Nations refugee agency (UNHCR) has launched its latest appeal for funding as it continues working to help more than 450,000 Central African Republic refugees struggling to survive across the region, an agency spokesperson said today.

Addressing a press briefing at the UN Office in Geneva, Karin de Gruijl explained that the $331 million appeal presented by UNHCR and 18 partners would seek to provide safety, food, clean water, shelter, health and other basic services to a potential 460,000 people which the agency expects will be seeking refuge in Cameroon, Chad, the Democratic Republic of the Congo (DRC) and Republic of the Congo by the end of the year.

With nearly 10 per cent of the Central African Republic’s population of 4.5 million currently living in exile, UNHCR fears that the number of refugees fleeing the country’s conflict may reach as high as 460,000 by year’s end or even surpass that estimated number.

“UNHCR is extremely concerned that violence in the Central African Republic will continue and that the number of people forced to flee their homes will grow,” Ms. de Gruijl told reporters.

She noted that recent violence in the CAR’s Kouango district, some 300 kilometres from the capital of Bangui, had reportedly send thousands of refugees fleeing into the most remote areas of the DRC’s Equateur province.

“Refugees who manage to cross into the DRC are telling us stories of their villages being burnt, violence and murder,” she continued. “Some refugees arrive wounded including with bullet wounds.”

Ms. de Gruijl confirmed that an emergency evaluation team had just returned from the banks of the Oubangui River in the DRC, where many refugees had settled, and was “working on a plan to relocate the refugees away from the border, so that they are safer and can receive humanitarian assistance.” Nonetheless, she added, the bulk of refugees fleeing the CAR had fled west to Cameroon and north to Chad.

The CAR appeal comes as UNHCR’s financial needs have more than doubled in the previous five years. Despite this, the agency receives only a small annual contribution from the UN regular budget. Its programmes are almost entirely funded by voluntary contributions from Government and private donors.

Over 2014, the $3.19 billion in contributions that UNHCR has received is less than half the amount needed, meaning that although the organization can cover the most basic needs such as water, sanitation, health and rudimentary shelter, important long-term activities such as vocational skills training, promoting livelihood activities or secondary education remain often underfunded. 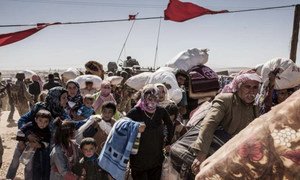 Faced with multiple large-scale emergencies in the Middle East and Africa, the United Nations High Commissioner for Refugees today warned donors at the agency’s annual pledging conference that the world’s humanitarian financing system was “close to bankruptcy.”