At a press conference in the Swiss city, UN Women Global Goodwill Ambassador Emma Watson, who launched the HeForShe campaign in September, said this next phase, HeForShe IMPACT 10X10X10, will focus on engaging governments, businesses and universities to make concrete commitments to advance women’s empowerment.

“Women share this planet 50/50 and they are underrepresented, their potential astonishingly untapped. We are very excited to be launching IMPACT 10x10x10 to bring the HeForShe into the next phase,” said Ms.Watson alongside UN Secretary-General Ban Ki-moon, Executive Director of UN Women Phumzile Mlambo-Ngcuka, as well as several political and business leaders.

In the months following the kick-off of the initiative in September, several Heads of State, along with celebrities and thousands of men from around the world have committed to be champions for the HeForShe campaign. Ms. Watson said: “Everyone from Desmond Tutu to Prince Harry to Hillary Clinton and Yoko Ono has issued their support.”

Best known for playing the leading role of ‘Hermione Granger’ in Harry Potter saga, Ms. Watson said: “I’ve had my breath taken away when a fan told me that since watching my speech [in September] she has stopped herself being beaten up by her father. I’ve been stunned by the number of men in my life that have contacted me since my speech to tell me to keep going and that they want to make sure their daughter will still be alive in a world where women have parity, economically and politically.” 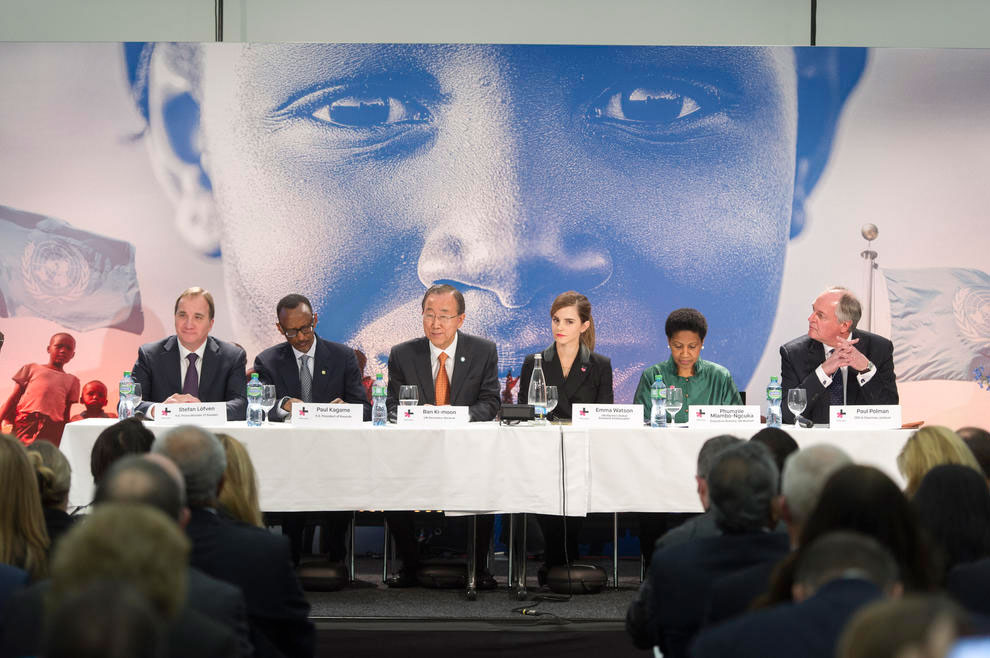 Secretary-General Ban Ki-moon with other participants at an event to unveil the HeForShe IMPACT 10X10X10 pilot initiative. UN Photo/Mark Garten 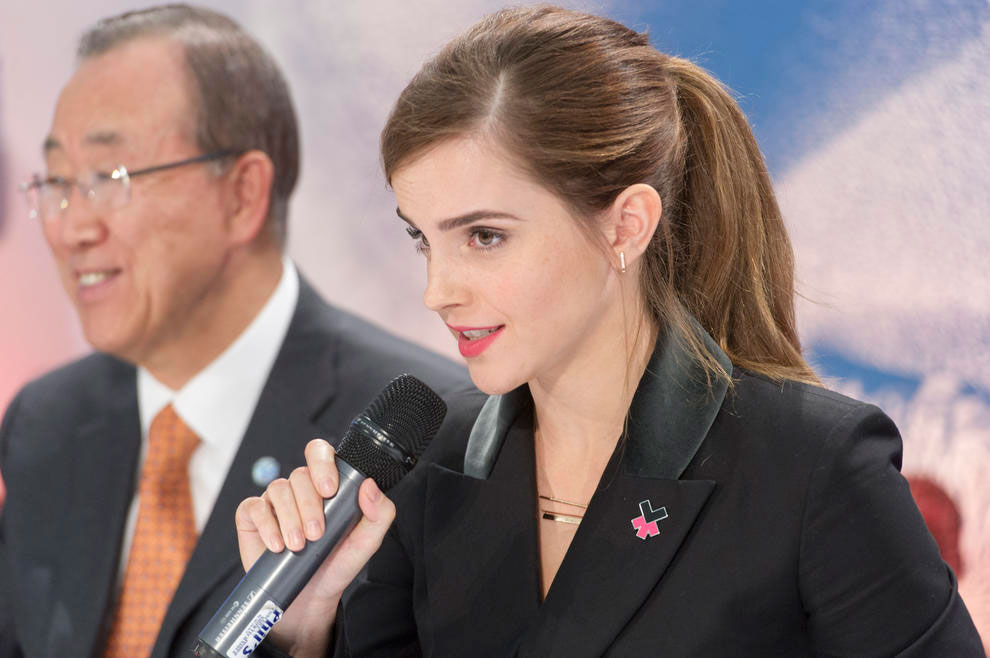 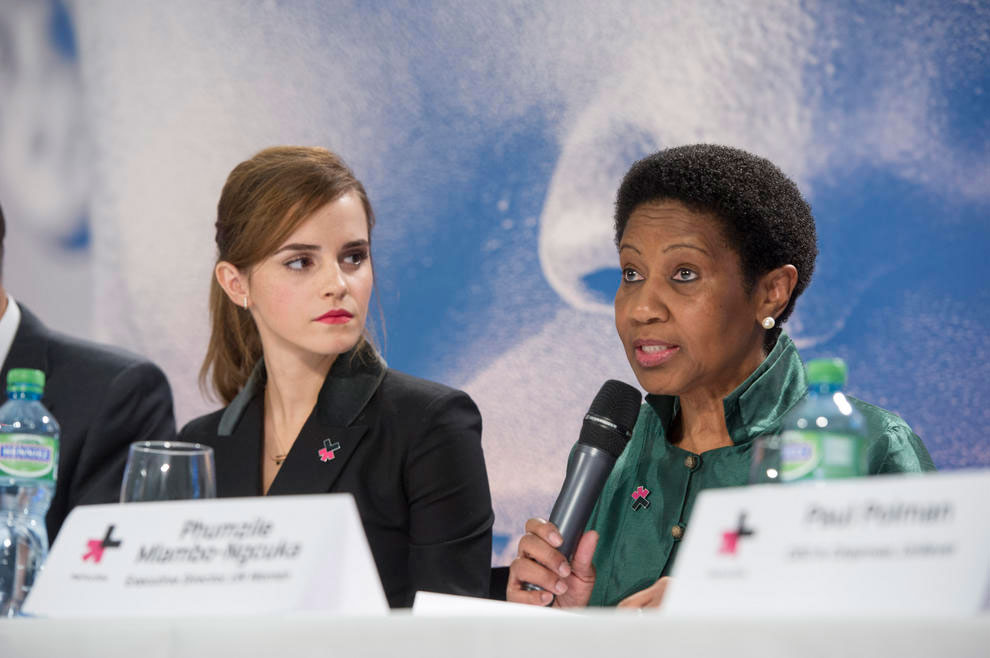 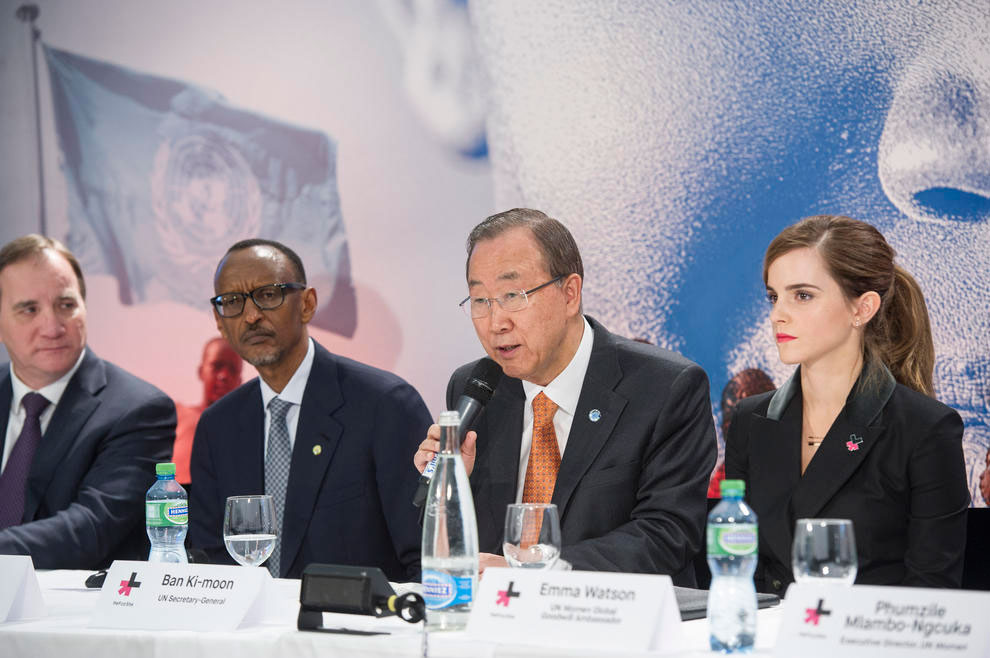 To date, more than 200,000 men and boys have signed their commitment to gender equality. HeForShe has reached more than 1.2 billion people on social media. But more can be done.

“Decide what your commitment is, make it public, and then please report back to us on your progress so that we can share you story. We want to support, guide and reinforce your efforts. Impact 10x10x10 is about concrete commitments to change, the visibility of these commitments and the measurability of them too,” declared Ms. Watson.

Joining Ms. Watson at the press conference, Secretary-General Ban Ki-moon said: “HeForShe has signed up fathers who want to raise empowered daughters; leaders who know their societies will be stronger when there are as many women in parliament and in business as men; and ordinary people who are fed up with violence and discrimination against women – and want to be part of a global force for change.”

Underling the alliances the campaign is building, Mr. Ban said that the partnership involves individuals and corporations, government leaders and activists, celebrities and global citizens.

“Ultimately we need everyone to get involved if we are to turn the tide,” said UN Women Executive Director and Under-Secretary-General Phumzile Mlambo-Ngcuka.

“The HeForShe IMPACT Initiative puts responsibility for change right where it matters- and spotlights leaders who can make it happen. The founding Champions from industry and Government will pave the way for others to join in, using the pilot initiatives to streamline decision-making on relevant and successful activities,” the Executive Director said.

The World Economic Forum’s Global Gender Gap Report 2014 highlights a large current gap between men and women in terms of political engagement and opportunity and little improvement in equality for women in the workplace since 2006. Universities join the impact trio because youth engagement represents one of the greatest opportunities for accelerating progress toward the achievement of gender equality, and ending violence against women.

At the launch, global leaders who will serve as IMPACT 10X10X10 founding Champions were announced. They will steer the initiative and lead in mobilizing their communities and include: Prime Minister of the Netherlands; President of Sierra Leone; Prime Minister of Sweden; CEO and Chairman of Unilever; Chairman and Chief Executive Officer of Tupperware Brands Corporation; Chairman of PricewaterhouseCoopers International Ltd. JPMorgan Chase is also a Title Sponsor of the HeForShe campaign.