Carmen Guadalupe Vásquez Aldana, who suffered a miscarriage at the age of 18 after reportedly being raped, was convicted of aggravated homicide after her crime was reclassified from ‘abortion’ to ‘aggravated homicide’ during her trial. She had already served seven years of her 30-year sentence.

“The pardon was granted on 21 January following a complex judicial review by the Supreme Court of Justice, which also required a majority plenary vote by the Legislative Assembly. Guadalupe had served seven years of her 30 year sentence,” a spokesman for the UN Office of the High Commissioner for Human Rights (OHCHR) said in Geneva today.

Rupert Colville said Ms. Vásquez’s petition was one of 17 cases presented before the Supreme Court in 2014 requesting pardons for women who are imprisoned on similar charges. El Salvador has a complete ban on and criminalizes abortion, even when the woman's life or health is at risk or in cases of rape or incest.

“We are encouraged by the decision to pardon Guadalupe and welcome the steps taken to review each case in line with due process standards,” Mr. Colville said, reminding that several human rights mechanisms, including treaty bodies and special procedures, have regularly expressed serious concern about the total ban and criminalization of abortion in El Salvador.

Such a ban has an impact on women's right to be free from discrimination as well as their rights to life and to health among other human rights, he added.

“We hope that other imprisoned women in El Salvador who received similar convictions will be freed and that efforts will be made to reform the legal framework on sexual and reproductive rights in line with the recommendations of numerous human rights bodies.” 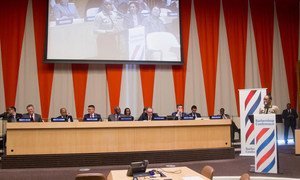 Looking to promote change in how men and boys think and talk about women’s empowerment and gender equality, the United Nations is hosting at its New York Headquarters a two-day high-level “Barbershop” event, which this afternoon focused on initiatives that aim to support non-sexist male attitudes and behaviours between men.