United Nations Secretary-General Ban Ki-moon has voiced serious concern about developments in Yemen following the resignation of the country's President and Prime Minister amid a takeover of the capital by Houthi militants.

United Nations Secretary-General Ban Ki-moon has voiced serious concern about developments in Yemen following the resignation of the country's President and Prime Minister amid a takeover of the capital by Houthi militants.

According to a statement released by Mr. Ban's spokesperson late yesterday evening, the Secretary-General urged all sides to remain “fully engaged” with his Special Adviser on Yemen, Jamal Benomar, who is currently in the capital of Sana'a and is consulting “closely” with stakeholders “to help find a way forward from the current crisis.”

The situation in Yemen has steadily deteriorated in recent days as Government forces engaged in intense fighting with rebel groups throughout the capital.

Following the shelling of the Presidential palace and reported attacks on the Prime Minister's residence, both President Abd Rabbo Mansour Hadi and Prime Minister Khaled Bahah submitted their resignations on 22 January.

“In these uncertain times in the country, the Secretary-General calls on all sides to exercise maximum restraint and maintain peace and stability,” the statement continued.

Earlier this week, the Security Council also voiced concerns over the situation in Yemen and similarly called on all sides to engage with Mr. Benomar who, the Council said, remained well placed to support parties' efforts to resolve their differences peacefully. 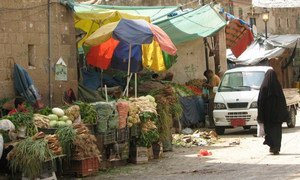 UN urges immediate halt to hostilities in Yemen, calls on all sides to abide by commitments

Secretary-General Ban Ki-moon and the United Nations Security Council today expressed grave concern about the deteriorating situation in Yemen, calling for an immediate ceasefire and the restoration of full authority to legitimate Government institutions.