The United Nations today commended Mali for stemming the Ebola outbreak and urged the West African nation to remain vigilant as neighbouring countries continue to report new cases as part of the epidemic that has recorded nearly 22,000 cases and more than 8,600 deaths to date.

Mali was declared Ebola-free earlier this week after a period of 42 days without a new case.

“We came with a message of congratulations. We came to say bravo, but remain vigilant,” the head the UN Mission for Ebola Emergency response (UNMEER) Ould Cheikh Ahmed, told Malian Prime Minister Modibo Keita in the Malian capital of Bamako today.

The head of the UN response mission, accompanied by Dr. Bruce Aylward, Assistant Director-General of the UN World Health Organizations (WHO), also emphasized the need to strengthen cross-border surveillance as part of the fight against the Ebola epidemic in West Africa.

“People, communities do not recognize the border, and therefore the next challenge for Mali – as indeed for Senegal and Nigeria, was also managed to isolate the few cases that came – is to remain vigilant,” Mr. Ould Cheikh Ahmed said. “We are not immune to new cases here and there, until we have zero cases throughout West Africa.”

UNMEER and WHO continued to support local authorities prepare for a cross-border meeting planned to take place in Lofa County in Liberia next week to improve border surveillance strategies and strengthen cross-border notification. Local authorities will participate, including those in the districts bordering Guinea and Sierra Leone.

WHO has recommended ‘robust’ exit screening in the three affected countries, which it said is ‘critical for minimizing the risk of exportation of Ebola cases.’

Surveillance and information sharing will be increased in the border districts of Guinea-Bissau, Côte d’Ivoire, Mali and Senegal adjacent to Guinea, Liberia and Sierra Leone, according to WHO.

The United Nations yesterday appealed for $1 billion needed for the first six months of 2015 to sustain the momentum to stamp out Ebola in the region where the epidemic has started to turn in all three of the worst-hit countries.

Meanwhile in Sierra Leone, two successive emergency response campaigns to distribute anti-malarial drugs to people living in areas affected by the Ebola virus disease outbreak have successfully reached more than 2.5 million people, and significantly reduced the number of people with fever that might be mistaken for Ebola, according to the UN health agency.

During the West African Ebola outbreak, people infected with malaria have been afraid to go to health centres for treatment or have been unable to receive treatment because some centres were closed. To reduce malaria transmission and related deaths, WHO has recommended a mass drug administration of anti-malarial medicines to all eligible people in Ebola hotspot areas.

In other news, following the reopening of schools in Guinea, attendance remained low in the first week, according to the UN mission. The UN Children’s Fund (UNICEF) and its partners continue to monitor schools to ensure measures put in place for the safe return to school are being adhered to around the country. 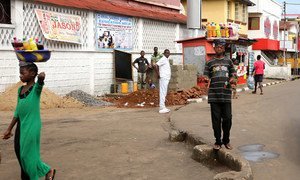 The United Nations today appealed for $1 billion needed for the first six months of 2015 to sustain the momentum to stamp out Ebola in West Africa, where ‘the epidemic has started to turn’ in all three of the worst-hit countries – Guinea, Liberia and Sierra Leone.