Private sector, ‘care economy’ will be key engines of job creation for next 5 years – UN report

Private sector services, such as business and administrative services, and real estate, as well as related industries, will employ more than a third of the global workforce over the next five years, according to new data released by the United Nations labour agency.

“Service sector employment will remain the most dynamic with respect to job creation in the next five years,” said Raymond Torres, a head researcher of the International Labour Organization (ILO) in a statement released today.

The ILO’s Economic and Social Outlook, released earlier this week, found that public services in health care, education and administration will also continue to be a major source of employment. While increasing at a slower pace than the private sector, they will still represent 15 per cent of total employment.

Industrial employment is expected to stabilize globally at slightly below 22 per cent because the pace of job creation in the construction sector is estimated to decline in comparison to the period 2010-2013. Meanwhile, employment levels in manufacturing will remain largely unchanged over the next 5 years and will account for only 12 per cent of all jobs in 2019.

The good news is that there is also growing demand for jobs that require face-to-face interaction, such as in health and personal services, signalling the emergence of a large care economy.

“These trends highlight the role of policies to help enterprises and workers seize the opportunities associated with new technology, while at the same time breaking barriers for moving up the economic and social ladder, especially for women,” said Mr. Torres.

But global trends show significant regional variations, with medium-skilled jobs disappearing in advanced economies at a faster pace than is the case in emerging and developing countries.

This polarization between higher and lower-skilled jobs is having a direct impact on labour incomes. The increase in jobs at both the lower and upper ends of the skills ladder, at the expense of those in the middle, has and will continue to contribute to widening income inequality.

The number of routine jobs, such as machine operator or assembler has decreased in many countries, raising concerns over the role of manufacturing in helping workers to escape poverty.

Without manufacturing jobs, opportunities for rural workers to improve their employment situation will be scarce. This shift of employment to services and a decline in manufacturing means a significant change in the skills demanded by the labour market.

“There will be a hollowing out of jobs needing medium levels of skill for routine tasks that can be automated,” said Mr. Torres.

People who once occupied these jobs will need to acquire new skills, or instead, face the prospect of competing for jobs at the lower end of the skill spectrum, he concluded. 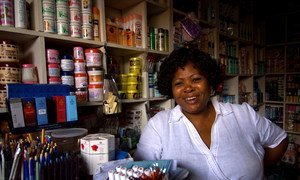 The last 20 years has seen a surge in the number of women employed in senior and middle management positions, according to a new United Nations report, which notes that although all-male company boards are decreasing in number, more must be done to achieve gender parity.