Ten years ago today, world leaders in Hyogo, Japan agreed on a framework to better manage risk and curb the impact of disasters in the wake of the devastating Indian Ocean tsunami – which claimed some 227,000 lives – and in March, they are set to meet for a United Nations conference in another Japanese city to take stock of whether the world has lived up to that promise.

The Hyogo Framework for Action (HFA), the outcome of the 2005 World Conference on Disaster Reduction, is the first plan to detail the work required from all different sectors and actors to reduce disaster losses. Looking to update that landmark agreement at a follow-up conference, global leaders in mid-March will head to Sendai, the centre of the Tōhoku region, which bore the brunt of the 2011 earthquake and tsunami that led to the Fukushima meltdown.

“The evidence of the last decade – which has been marked by some of the worst natural disasters on record – is far from favourable,” says Margareta Wahlström, Head of the UN Office for Disaster Risk Reduction (UNISDR) in an op-ed, published ahead of the Third World Conference on Diaster Risk Reduction, for the Project Syndicate website.

To spotlight the need for action, she sets out a litany of tragic signposts that mark the road to Sendai: Port-au-Price collapsed in an earthquake. Hurricane Katrina devastated New Orleans. Drought killed an unknown number of people in the Horn of Africa. Floods and earthquakes affected millions in Pakistan and China. Heat waves and wildfires ravaged countries around the world.

These incidents, she continues, are 'stark reminders' of the need for instruments like the HFA, especially because the drivers of risk – improper land use, non-existent or poorly implemented building codes, environmental degradation, poverty, climate change, and, most important, weak governance by inappropriate and insufficient institutions.

But there have been some important successes of the last decade, says Ms. Wahlström. “In Asia, where 80 per cent of the world's natural disasters are concentrated, the number of people directly affected has dropped, decade-by-decade, by almost one billion, owing to measures like the Indian Ocean early warning system.”

Timely evacuations in the face of accurately forecasted major storm systems have enabled the Philippines to save thousands of lives just in the last year. And over the last three years, China has worked hard to keep economic losses within its 1.5 per cent-of-GDP target.

Meanwhile, Turkey will have earthquake-proofed every school and hospital in the country by 2017, Ms. Wahlström continues, while adding that Ethiopia has developed a sophisticated data management system to help guide its efforts to address not only drought but also other natural hazards. Both countries – and many others – have incorporated the study of disaster risk into their school curriculums.

And the European Union has estimated that €1 ($1.18) spent on flood protection brings €6 in savings. She goes on to say that in the United Kingdom, investment in flood defences meant that 800,000 properties were protected during last winter's storms, significantly reducing the bill for response and recovery.

Nonetheless, noting that 2015 marks the 20th anniversary of the devastating Kobe earthquake, Ms. Wahlström points out that in the past 44 years, disasters caused by weather, climate, and water-related hazards have led to 3.5 million deaths, according to UNISDR. Even where people's lives are saved, their livelihoods are often decimated. Since 1960, disasters have cost the world more than $3.5 trillion, which both developed and developing counties paying a huge price.

“That is why world leaders, through the HFA, need to agree to scale up efforts to cope with the risks posed by rising sea levels, global warming, rampant urbanization and rapid population growth,” she says, adding: “Only with strong political commitment at the highest level can real progress towards a safer, more sustainable future be made.”

With that in mind she says that it should not be difficult to win support for a revised HFA. “After all, there is no compelling – or even rational – reason which a finance minister or CEO would choose to pay for recovery but not invest in prevention.”

“If the UN conference produces the right agreement, resilience can become the hallmark of 2015, setting the tone for agreements later in the year on climate change and sustainable development – both of which hold important implications for disaster risk,” Ms. Wahlström concludes.

In an interview today with UN Radio, she said her message on this anniversary was quite simple: ‘unless we really respect and take disaster risk seriously, the cost to development and the damage it causes will continue to undermine the aspirations of people for economic and social development. The opportunity is now.’

Hence it is important to integrate disaster risk reduction into education and build early warning systems so that when disasters happen, countries are better equipped. The most challenging area is addressing ‘underlying risk factors’ and how to mainstream disaster risk in urban planning, equality of infrastructure, and flood management. Another challenge is understanding risk, which Ms. Wahlström defined as a combination of factors that may trigger a disaster.

“A lot of focus must be made on local governments and the rest of society to make sure that they understand how to plan together with community groups and social groups, make sure that women and young people are involved,” she said.

Countries are now looking critically at these challenges and on how to work together on these areas with a lot of focus of infrastructure, especially in urban areas. It is a good sign that disaster risk is being discussed at other development negotiations in talks on climate change and the upcoming development agenda.

“Unless we get this issue up the political agenda alongside other critical areas like climate change and development it’s not really going to be able to make its full contribution to sustainability,” Ms. Wahlström concluded.

Also today, Secretary-General Ban Ki-moon in a statement commemorating the 10 year anniversary of the HFA, credited the landmark document for having ‘laid down solid foundations’ for building resilience to disasters and saving thousands of people thanks to better early warning systems, improved weather forecasting and better education on risk and dangers posed by natural hazards.

“However, it is also clear that while we are doing a better job of managing disasters, we are less good at managing disaster risk. Society creates the disaster, not the hazard itself. Disaster risk is rising along with a failure to address the drivers of risk such as poverty, climate change, inequality, unsustainable land use and weak building codes,” said Mr. Ban.

He looked forward to these issues being addressed in the updated Hyogo Framework for Action, which will be adopted at the Third UN World Conference on Disaster Risk Reduction in Sendai.

“2015 can be a turning point in human development if we agree on a path to resilience through strong agreements on disaster risk reduction, development financing, climate change and a new set of sustainable development goals,” said the Secretary-General. 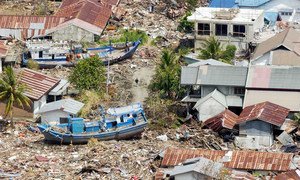 It has been ten years since a massive tsunami swept across the Indian Ocean killing more than 200,000 people and devastating coastline communities from Indonesia to Somalia. Today, the world today is much better prepared to mitigate such disasters, senior United Nations officials have declared.