The United Nations Office for the Coordination for Humanitarian Affairs (OCHA) is reporting that thousands of people in North Darfur are now confirmed as displaced following ongoing fighting in the region, a UN spokesperson announced today.

In the El Fasher, Shangil Tobaya, Tawila, and Um Baru areas of North Darfur, the UN humanitarian office said it had “newly verified” the displacement of more than 18,000 people in the latest report from the beleaguered region.

The news, in fact, comes amid a worsening security climate and dire humanitarian crisis across Darfur with rising hostilities between Government forces and armed movements, deadly inter-communal conflicts and a precipitous rise in criminality and banditry.

According to UN estimates, the number of people displaced by conflict has increased to more than 430,000 since the beginning of 2014, with close to 300,000 remaining displaced in addition to the more than two million long-term internally displaced persons, or IDPs.

At the daily briefing earlier this afternoon, UN spokesperson Farhan Haq said OCHA had reported that in Um Baru over 2,200 of those displaced were sheltering beside the UN-African Union Mission in Darfur (UNAMID) base. Moreover, a steady flow of displaced persons continues to arrive at the base seeking shelter and protection.

At the same time, he said, some 200 people have also reached the UNAMID site in Sortony as they reportedly feared attacks on villages in the area.

OCHA noted that access to Sortony continued to pose a challenge for humanitarians but that efforts were underway to deliver aid. Meanwhile, in Jebel Marra aid agencies were unable to reach those displaced due to ongoing hostilities and access constraints. 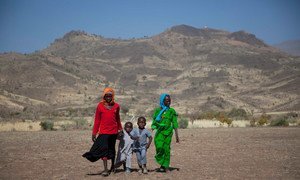 The United Nations Office for the Coordination for Humanitarian Affairs (OCHA) today said that it has received reports of significant civilian displacement in Sudan's North Darfur and South Darfur states.