The United Nations Office for Disaster Risk Reduction (UNISDR) has welcomed the launch of a new web-based platform that will provide global access to critical information on earthquakes and enable ‘cutting-edge’ risk assessment aimed at limiting the hazard of these potentially devastating natural events.

The platform – known as OpenQuake – is a ‘major milestone’ for the international community of earthquake hazard and risk experts, according to Margareta Wahlström, the head of UNISDR, who hailed the unveiling in a press release today while emphasizing that the deep understanding of risk remained the basis of any disaster risk reduction (DRR) policy and action.

“Loss of life and economic loss from earthquakes can only be mitigated or prevented through DRR efforts that include urban planning, improved regulation through building codes and compliance with those codes,” said Ms. Wahlström.

“This requires sound technical information to support the financial investments and governance required to reduce risk in the long term.”

Seismic risk will be an important feature of the upcoming Third World Conference on DRR scheduled to take place from 14-18 March in Sendai, Japan.

In the UNISDR press release, Ms. Wahlström appealed for more ‘multi-hazard, multi-sectoral’ risk information which should include tools for measuring ‘socio-economic vulnerability as an underlying risk driver’ – an issue she suggested should become a standard part of all risk assessments.

In addition, she urged the diffusion of tools to further assess exposure, hazard, building vulnerability, community resilience and assistance in developing the capacity of member countries and other stakeholders. 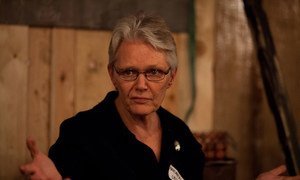 Twenty years after 6,434 lost their lives in the Kobe earthquake, the Head of the UN Office for Disaster Risk Reduction (UNISDR), Margareta Wahlström, took part yesterday in the official commemoration of the disaster in Japan.