Five months after a series of landslides and subsequent flooding brought devastation to large swathes of Nepal, thousands of survivors continue to remain exposed to bitter temperatures and wintry conditions, the United Nations Population Fund (UNFPA) has warned.

The UN agency – which has a mandate to focus on improving sexual and reproductive health issues for women around the world – has been active on the ground since mid-August when the Government of Nepal launched an appeal for humanitarian assistance following the massive flooding and landslides which affected some 130,000 people across 23 of the country’s districts.

The agency has since been distributing so-called ‘dignity kits’ containing warm winter clothes, flashlights, soap, and sanitary napkins, as well as reproductive health kits to uprooted families. The reproductive health kits, for their part, are made up of medicines, equipment to support safe deliveries, family planning supplies and supplies to aid in the treatment of rape.

Overall, each kit is designed to provide reproductive health services to between 10,000 and 30,000 women for a three-month period.

“This support is in accordance with UNFPA Nepal’s commitment to providing reproductive health services, prevent and respond to gender based violence, prevent transmission of HIV and provide much-needed hygiene supplies,” she explained.

UNFPA noted that it would continue to work with the Government and other UN agencies to ensure that the needs of those women and girls still reeling from the disaster continue to be met.

“For many women and their families, the hardships are likely to continue until spring,” the agency said. 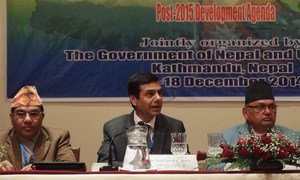 A United Nations-backed meeting focusing on the Least Developed Countries (LDCs) of Asia and the Pacific kicked off today as international delegates, UN officials and Government ministers embarked on discussions over how to help the region’s poorest nations “graduate” to a higher level of development.