Women and children make up the vast majority of the latest wave of refugees fleeing violence in northern Nigeria, the United Nations Children’s Fund warned today, spotlighting its ongoing efforts to provide basic assistance, including safe water, nutrition, health, education and protection services to affected children in the region.

“Children are suffering the dire consequences of the conflict in Nigeria, losing their homes, missing out on education and risking their lives,” UNICEF’s Christophe Boulierac told reporters in Geneva.

Boko Haram’s recent attacks on Baga drove a fresh wave of refugees into neighbouring countries, worsening a humanitarian crisis in the region that has already seen 1 million people displaced from their homes and more than 135,000 seeking refuge in Cameroon, Chad and Niger.

About 9,000 people crossed into Chad this month, a mixture of Nigerian refugees and Chadian returnees, bringing the total number of Nigerian refugees there to over 10,000. More than 100 children arrived without a parent or a caretaker, and Mr. Boulierac said UNICEF would scale-up its presence around Lake Chad, using its office in Mao to distribute lifesaving supplies, like hygiene kits and therapeutic food as well as blankets, clothing, tents and water supply.

Mr. Boulierac said a recent assessment of children in the Minawao camp revealed an alarming rate of malnutrition, noting that the UNICEF is working with the Red Cross to provide nutritional screening and treatment and to create child-friendly spaces where children could receive psycho-social support. In addition, the agency built 10 clean water facilities and 160 latrines, and distributed 1,300 hygiene kits.

Vaccination efforts in Niger saw over 96,000 children protected against measles between 28 December and 3 January, while school capacities are being reinforced so refugee children could study alongside locals.

UNICEF is working also with displaced children in Nigeria, where more than 65,000 children were being treated for severe acute malnutrition. Trained community volunteers have reached over 13,000 children with psychosocial support, and more than three million children have received vitamin A supplements.

Mr. Boulierac’s briefing comes the day after Security Council Members condemned in the ‘strongest terms’ the recent escalation in attacks conducted by Boko Haram, and expressed deep concern that the activities of the Islamist extremist group, including a spate of shocking suicide bombings across northern Nigeria, are undermining peace and stability in the West and Central African region and some ‘may amount to crimes against humanity.’

Overall, Boko Haram violence in Nigeria may have forced at least one million people to flee their homes, the International Organization for Migration (IOM) said today, citing a combination of IOM and Nigerian government data on people displaced from 10 states including Borno, the heart of Boko Haram activity. 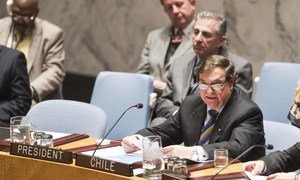 The United Nations Security Council today condemned in the 'strongest terms' the recent escalation in attacks conducted by Boko Haram, and expressed its deep concern that the activities of the Islamist extremist group, including a spate of shocking suicide bombings across northern Nigeria, are undermining peace and stability in the West and Central African region.