UN urges immediate halt to hostilities in Yemen, calls on all sides to abide by commitments

Secretary-General Ban Ki-moon and the United Nations Security Council today expressed grave concern about the deteriorating situation in Yemen, calling for an immediate ceasefire and the restoration of full authority to legitimate Government institutions.

Mr. Ban, in a statement issued through his spokesperson, also condemned the recent kidnapping of Ahmed Awadh Bin Mubarak, Director of the Office of the President, and demanded the official’s immediate release.

The statement was issued amid reports that in the Yemeni capital, Sana’a, the presidential palace has been taken over amid renewed clashes and that the Prime Minister's residence was also under attack from the street.

The UN chief’s statement says he deplores the heavy fighting between Ansarallah armed groups and Yemeni presidential guards throughout Sana’a.

“All sides must abide by their stated commitments to resolve differences through peaceful means to ensure the full implementation of the Peace and National Partnership Agreement in accordance with the outcome of the National Dialogue Conference and the GCC [Gulf Cooperation Council] Initiative and Implementation Mechanism,” according to the statement. “He also reminds all sides of their obligations under relevant Security Council resolutions.”

Security Council Members echoed many of the Secretary-General’s views, stressing the importance of adherence to resolutions 2014 (2011), 2051 (2012) and 2140 (2014) and joining the Secretary-General in urging all sides to remain fully engaged with his Special Adviser on Yemen, Jamal Benomar.

The Council said Mr. Benomar, who had briefed the body earlier via videoconference, was well placed to support parties’ efforts to resolve their differences peacefully through the Presidential Committee and Members called for restraint in Marib, where tribal fighters were reported to be on high alert for an attack by Houthi rebels.

As well as underscoring the importance of full implementation of the terms of the Peace and National Partnership Agreement, including its Security Annex, the National Dialogue Conference Outcomes, and the GCC Initiative and Implementation Mechanism, the Security Council also underlined that President Abdo Rabbo Mansour Hadi is the legitimate authority based on the GCC Initiative and on election results.

In line with that, the Council emphasized that all parties and political actors in Yemen must stand with President Hadi, Prime Minister Bahah, and Yemen’s Cabinet to keep the country on track to stability and security.

Welcoming completion of a draft constitution and its referral to the National Authority and looking forward to the start of the public consultation on the draft, Security Council members called for all parties to rapidly engage in finalising the constitution in a constructive manner which responds to the aspirations of the Yemeni people. 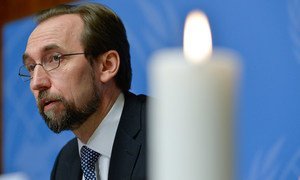 The top United Nations human rights official appealed today for more international attention to be focused on Yemen and the plight of Yemenis as deepening insecurity and “utterly intolerable” violence in the country continue to wreak a terrible toll on civilians.