Despite a sharp decline in oil prices, the International Monetary Fund (IMF) in its latest economic outlook today lowered growth expectations for this year and the next for most countries due to slowdown in investment, and urged governments and central banks to pursue economic stimulation policies and structural reforms to boost growth.

According to its World Economic Outlook (WEO) update , the IMF now expects growth of 3.5 per cent this year, compared with the previous estimate of 3.8 per cent which it made in October. The growth forecast for 2016 has also been cut, to 3.7 per cent. It also showed increased growth prospects for the United States.

In addition, the Outlook, released on the eve of the annual Davos World Economic Forum, found increasing divergence between the United States, on the one hand, and the euro area and Japan, on the other.

For 2015, the U.S. economic growth has been revised up to 3.6 per cent, largely due to more robust private domestic demand. But the euro area has been revised down 1.1 per cent, due mostly to weaker investment prospects and despite the support from lower oil prices, further monetary policy easing, a more neutral fiscal policy stance, and the recent euro depreciation.

“In the medium run, the future [in Europe] doesn’t look as bright. Investment is weak and so, for most countries, we’re revising down, not much, but down. Now, this being said, I think we may be a bit pessimistic about the effects of the price of oil so in the jargon of economists there’s an upside risk, in which, in fact, the price of oil will help more and things will turn out better, but we can’t count on it,” said Olivier Blanchard, IMF’s chief economist.

In Japan, where the economy fell into technical recession in the third quarter of 2014, growth has been revised down as well. However, policy responses, together with the oil price boost and yen depreciation, are expected to strengthen growth this year and the next.

In emerging markets and developing economies, growth is projected to remain broadly stable at 4.3 per cent in 2015 and to increase to 4.7 percent in 2016 – a weaker pace than forecast last October.

In China, where investment growth has slowed, the forecast has been marked down to below 7 per cent. “The policy makers in China have decided to reduce some of the dangers that they were facing on housing, on shadow banking, are taking the right measures. They are also trying to reorient growth from investment to consumption so all this is desirable but it’s leading to a lower growth rate,” Mr. Blanchard explained.

“Now, this is having an effect on the rest of the world through trade so Asian countries around China will have other things equal, lower growth, because they will be exporting less. We think the effect is relatively small. If you wanted a number, one percent less growth in China leads to about .3 per cent less growth in Asia,” he added.

The sharpest decline of all is for Russia, whose economic outlook is much weaker, with growth forecast at – 3.0 per cent for 2015, as a result of the economic impact of sharply lower oil prices and increased geopolitical tensions. 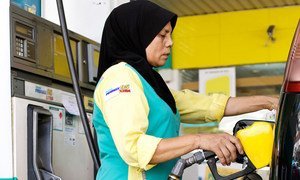 After an economically disappointing 2014, developing countries can expect an uptick in growth in the new year as soft oil prices, a stronger United States economy, and continued low global interest rates help fuel their recovery, according to a new flagship study issued by the World Bank Group.