Senior United Nations officials underlined the importance of the intergovernmental negotiations that got under way at UN Headquarters in New York today aimed at finalizing the post-2015 development agenda, as they addressed the General Assembly this afternoon.

“Today marks the beginning of critical intergovernmental negotiations to finalize the post-2015 development agenda,” said UN Secretary-General Ban Ki-moon, who spoke alongside the President of the General Assembly, Sam Kutesa, and the President of the Economic and Social Council (ECOSOC), Martin Sajdik. “The world is watching and expectations are high.”

Stressing that Member States have the “extraordinary opportunity – and the responsibility” to adopt an inspiring set of sustainable development goals, ensure their adequate financing, address climate change and rigorously monitor progress leading to the planned-for transformation, Mr. Ban encouraged the Assembly to take advantage of a ‘seminal year’ to kick-start a new era of global sustainability.

He said it was time to realize the promise of the UN Charter: “to reaffirm faith in the dignity and worth of the human person, in the equal rights of men and women and of nations large and small” and drew attention to his synthesis report, The Road to Dignity by 2030: Ending Poverty, Transforming All Lives and Protecting the Planet designed to help guide negotiations by framing and bringing clarity to the post-2015 development agenda through six essential elements: dignity, people, prosperity, planet, justice and partnership.

The Secretary-General looked ahead to meetings in Addis Ababa to pave the ground for bold actions on financing and the global partnership for sustainable development, in New York to adopt the post-2015 development agenda and sustainability goals, and in Paris to adopt a legal framework for a climate change agreement.

As States embarked upon negotiation of the agenda’s final parameters, Mr. Ban said it was clearly necessary that it should include a compelling and principled narrative, based on human rights and human dignity, and that the Sustainable Development Goals should be at its core. Robust global partnership was needed to mobilize financing and other means of implementation and monitoring should be central.

“Let us demonstrate global citizenship, foresight, moral courage and political leadership as we reach final agreement on plans to support people, communities, societies and our beautiful planet,” he said, promising the support of the whole United Nations system throughout the process.

Mr. Kutesa, who opened the meeting, said the meeting was a chance to exchange views on the inputs for the negotiations, including that synthesis report and the proposal on the Sustainable Development Goals.

“With the proposed [sustainable development goals], it is now clear what Member States would like the post-2015 development agenda to achieve,” he said, adding that the focus on poverty eradication indicated that the agenda could be truly transformative. “In the coming months, Member States and stakeholders will consider how they intend to achieve these ambitious goals and targets.”

One aspect that will clearly differentiate the post-2015 development era centred on the sustainable development goals from the MDG era is that the newer targets are designed to be holistic and universal. States would have to ensure mobilization of adequate means of implementation, in the form of financial resources, technology development and transfer, and capacity building.

“The agenda we formulate should put people at the centre,” said Mr. Kutesa. “It should be responsive to and meet people’s needs and aspirations. It should preserve our planet for the present and future explanations.”

Mr. Sajdik said ECOSOC and the High-Level Political Forum on Sustainable Development would work to promote an integrated approach to implementation of the post-2015 agenda. In particular, the Forum would provide political leadership, follow-up and recommendations on sustainable development commitments, notably the relevant goals, at the highest level.

“Let’s not forget one undisputable fact: from January 1, 2016 it is all about implementation!” he said, adding that the unprecedented scale of financing and other means of implementation needed for that implementation would require a renewed partnership for development.

In addition, he stressed that it was down to Government delegates to produce an agenda that can be communicated and re-communicated over the whole 15 years of its lifespan.

“Let us be strategic and visionary, capturing all the right elements and fitting them together effectively to holistically advance the post-2015 development agenda,” he said. “But let us also be realistic, building on what we already have and not trying to reinvent the wheel.” 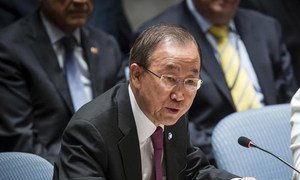 Stressing that the United Nations is built around the three pillars of peace and security, development and human rights, Secretary-General Ban Ki-moon, today underlined the need to pay attention to their interdependence, during an address to the Security Council.