FAO/Sandro Cespoli
A crop of sorghum in Uruguay, funded by the International Treaty on Plant Genetic resources for Food and Agriculture.
19 January 2015

Knowledge of agricultural genetic resources needs to grow more quickly because of the critical role they have to play in feeding the world as climate change advances faster than expected, according to the United Nations Food and Agriculture Organization (FAO).

As the FAO's Commission on Genetic Resources for Food and Agriculture starts its biennial meeting today, the Organization has sounded a warning that much more must be done to study, preserve and use the biological diversity that underpins world food production.

“In a warmer world with harsher, more variable weather, plants and animals raised for food will need to have the biological capacity to adapt more quickly than ever before,” said FAO Deputy Director-General Maria Helena Semedo. “Preventing further losses of agricultural genetic resources and diverting more attention to studying them and their potential will boost humankind's ability to adapt to climate change.”

During its meeting, the Commission will consider adopting guidelines for integrating genetic resources into climate change adaptation plans that the FAO has developed in line with guidance from the UN Framework Convention on Climate Change (UNFCCC).

The draft guidelines argue for an increased and explicit use of genetic resources as a part of overall adaptation measures needed to assure food security – in recognition of the critical role that genetic diversity must play there – and contain a range of recommendations aimed at helping countries implement policies and strategies for studying, preserving, and utilizing genetic resources to adapt to climate change.

The aim is to support Governments' use of genetic resources – ranging from seed varieties of major staple crops to the millions of microbes living in the soil, an area where expertise is relatively thin – in their national plans for coping with climate change. Micro-organisms are often decried as agents of disease in crops and livestock but actually perform myriad functions and protect their hosts from myriad threats.

“We need to strengthen the role of genetic resources and help farmers, fishers and foresters cope with climate change,” says Linda Collette, Secretary of the Commission and lead editor of a book released by the FAO on the subject of genetic resources.

The book, Coping with climate change: the roles of genetic resources for food and agriculture, says it is vital for the world to build its knowledge of genetic resources for food and agriculture and their characteristics such as resistance to drought or disease. Documentation of locally adapted varieties and breeds of crops and livestock are poorly documented and may be lost before their potential roles in climate change adaptation are recognised.

“Time is not on our side” it argues. “In the coming decades, millions of people whose livelihoods and food security depend on farming, aquaculture, fishing, forestry and livestock keeping are likely to face unprecedented climatic conditions.” 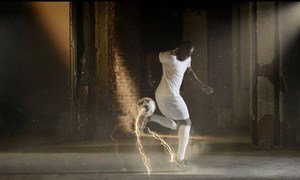 A United Nations-supported video campaign to fight hunger in Africa will feature at the matches throughout the 2015 Africa Cup of Nations, starting 17 January, the UN Food and Agriculture Organization (FAO) announced today.